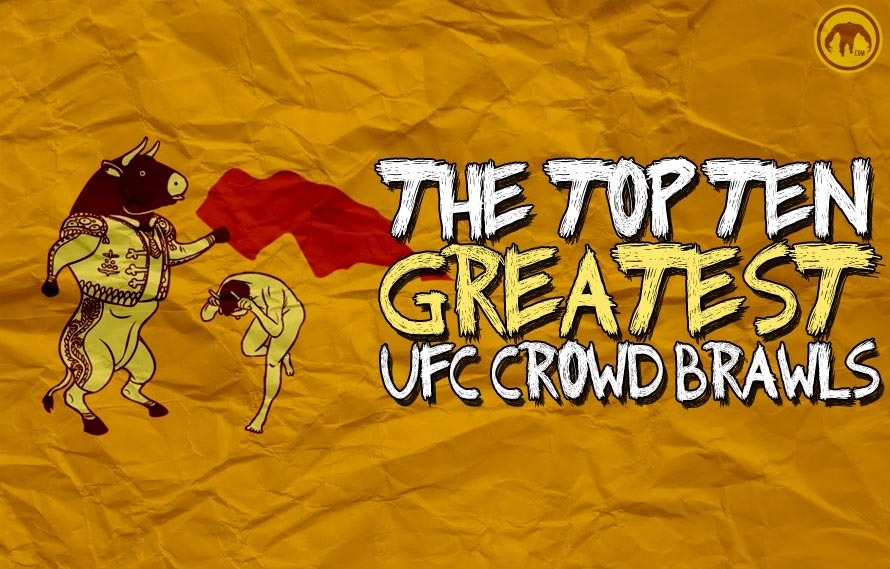 Sometimes when an amazing card at an equally amazing venue is just not enough, fans will resort to replicating their own MMA matches at their earliest convenience. Fortunately for all of you Street MMA enthusiasts, these bouts are being caught on camera. Massive thumbs up to technology and its ability to remove all elements of privacy from our lives. It’s great to have every moment documented for the rest of eternity. It’s as if we are all granted eternal life, and it’s partially due to YouTube.

For some reason we find that most UFC brawls happen in odd-numbered UFC events. It’s a phenomena that’s better left to be unexplained. After culling through the vast reaches of the internet we’ve located the the top ten greatest UFC crowd brawls in history, and we even made a list of them. Enjoy.

It only took fifteen years for Liu Kang’s infamous bicycle kick to appear in MMA, and it just so happened that it went down while a fan was on his back outside of the Octagon. This incident happened at UFC 101 in Philly, an event that actually spawned more crowd brawls than we could track of.

Sometimes if you lack the ability to strike effectively, if you just touch your opponent enough times he/she may get the point and leave you alone. If there was something that represented the exact opposite of ‘K-1 level striking,’ this would undoubtedly be it. We’ve never seen an attacker be subdued this effortlessly in UFC crowd brawl history.

If you’re going to go on the offense, be sure to either pull up your pants or wear a belt. No one deserves to serve as a witness to your butt crack — and everything else that comes included with it. We’re pretty sure it’s astronomically humiliating to get beat up by a guy that is incapable of wearing pants. Bummer — literally.

Another UFC event in Canada, another wild and unnecessary crowd fight. This one happened in Vancouver and it seemed to involve four people, all of which were being instructed by the crowd. Note to other people that document UFC crowd brawls: don’t be afraid to fire up your handy video editing software and make sure the brightness is acceptable for the average human being that doesn’t have mutant powers of super sight.

AXS TV’s Michael Schiavello and I actually attend this event in Dallas, Texas and I distinctly remember being on the floor, looking up in the stands as it happened. Some people call it a sucker punch, I just call it one well-placed jab that knocked a guy out with one hit. Check it out.

Here’s another angle, clean shot or was it sneaky? You decide.

Philly fans, the only guys that would have the audacity to boo Santa Claus. The fight that Joe Rogan mentioned and Tito Ortiz and Chuck Liddell decided to look at during UFC 101’s Aaron Riley vs. Shane Nelson bout was leaked — and it’s classic Philadelphia. As Joe Rogan said during the broadcast: ‘90% of the crowd is watching a fight in the crowds‘.

People either really hate Roy Nelson’s Bruce Springsteen walkout song, or they just want to prove they are ‘born in the USA’ by acting as stereotypically American as possible. The Boss approves of this UFC crowd brawl, and so should you.

It’s clear that police officers need to stop with the brute force and learn a little bit of technique if they’re going to attempt to takedown a guy at a UFC event. This happened in Rosemont, Illinois, and it’s not so much a UFC crowd brawl as it is a display of horrible grappling. Check it out.

I think we should all abandon the myth that Canadians are gentle people that stop at nothing to apologize for no apparent reason. Absolutely wrong. These guys are brutes that will stop at nothing to inflict physical harm on anyone they see. Alright, so they’re kind of in the middle — but it’s clear that Canadians love the odds of 3-on-1 fights.
https://www.youtube.com/watch?v=pfYkKfR16TE

Fortunately we found the second part of this brawl, and it looks like the guy that was jumped and his friend got a little revenge.

Brock Lesnar defeats Randy Couture to be the UFC heavyweight champion and everyone thinks they can just rag doll another human at will. A lot of stuff happens in this video, but the most notable is the power bomb pulled off by the security guard on a fan. Amazing stuff, that judo. I’m sure Ronda Rousey is impressed.

GRAPHIC: MMA fighter lands on his leg and it instantly SNAPS in half in this video
Read Next Post →
Click here to cancel reply.