The Top Ten Things You Didn’t Know About MiddleEasy

My god, five years of this stuff. I can’t believe it either. To celebrate this historic moment in MMA history, we’re going to deliver some unique offerings to you guys over the next few days, including this new top ten list of never-before-revealed information about MiddleEasy. Enjoy.

10.) SiriusXM wanted to give us a show

Back in 2012, SiriusXM contacted us in regards to making a ‘MiddleEasy Radio’ show that would air on a newly-created ‘UFC Channel’ that still hasn’t come to fruition. Once we agreed, they made arrangements for Bauzen, Gary LaPlante, Jason Nawara, and LayzieTheSavage to appear in studios across the country to record a live MiddleEasy demo. This was made directly after the Jon Jones dropping out of UFC 151 debacle, so we were all pretty amped up.

As far as the show, we’ve been getting the same BS run-around from SiriusXM for years now. We’ve been told it’s going to be greenlit since 2012, and the last correspondence I had with them in March 2013, I was told they were going to ‘push for it.’
Yeah, typical corporate rambling. Regardless, check out this never-before-heard MiddleEasy Radio demo we created for SiriusXM.

True story, at one point in the history of MiddleEasy, more than one writer/producer wanted to be paid in marijuana edibles that could be obtained at dispensaries in California. Normally this wouldn’t pose a problem, however they didn’t live in California, so all items were shipped through state lines. Of course this made the entire process pretty illegal, so in order to not get busted, I wrapped the package in cellophane, and then packed the box with dryer sheets so there would be no odor emanating from the box.

It seemed to work for months, until one shipment was left in one writer’s apartment receiving office for an entire week during the summer and it started to give off that familiar skunky smell. The apartment complex called the cops to open the package and then they paid a visit to the person’s door. Like a pro he/she, denied any knowledge of the package, but unfortunately we had to stop our half-assed drug trafficking system. Oh, thank you United Postal Service — you guys are fabulous marijuana dealers.

8.) No one has successfully sued MiddleEasy

Before writing this top ten list, I wanted to collect all of the legal threats we’ve received over the years and post them all on MiddleEasy, but we just have far too many of them. From photos we’ve used on banners to items that appeared in our Sunday Morning Rumor Mill, veiled threats from attorneys continue to pile up, and we just ignore them. It’s not that we haven’t read them, we do, but our own legal advisers told us to intentionally ignore them.

However the closest the site actually came to being sued was a few years ago when we published the Tank Abbott vs. Scott Ferrozzo II fight video, that happened in the confine of some dude’s backyard. Apparently they made a website for people to watch the video for a nominal fee of $19.99, however one of my readers found a backdoor on the site which allowed them to give me the entire video for free. I published the fight on MiddleEasy, and the next day the phone calls and emails started to hit. It’s one of the few articles we had to pull from the site simply because it wasn’t worth it to get sued over a Tank Abbott backyard brawl shot on a cellphone camera.

7.) We lost our deal with USA Today over a video of Seth Petruzelli urinating on Tom Lawlor’s girlfriend

Unfortunately with the volatile nature of the internet, this video has been deleted from existence which is a bummer considering it’s the point in MiddleEasy history in which we chose content over money.

Skip back to 2010, Seth Petruzelli released a video on his Facebook page of himself, along with Tom Lawlor and his girlfriend getting nutty in a hotel room. At one point in the video, Petruzelli waits for Lawlor to turn a corner so he can surprise him with a golden stream, but when it’s his girlfriend instead, she catches a urine stream directly in the face. The entire incident was filmed and everyone inside the hotel room nearly convulsed with laughter, so we published it on MiddleEasy.

Hours later I got a phone call from USA Today asking me to take down the video because it might offend advertisers. I told them the entire concept of partnering with MiddleEasy is for us to produce dope stuff and for them to reap the benefits, but with most corporations, they were homogenized and couldn’t understand the drive behind MiddleEasy. They told us to remove the video immediately, and I told them to remove us from our USA Today partnership, and they did.

Since I can’t find the video for you, here’s this photo of Seth Petruzelli strategically applying baby oil on Tom Lawlor. 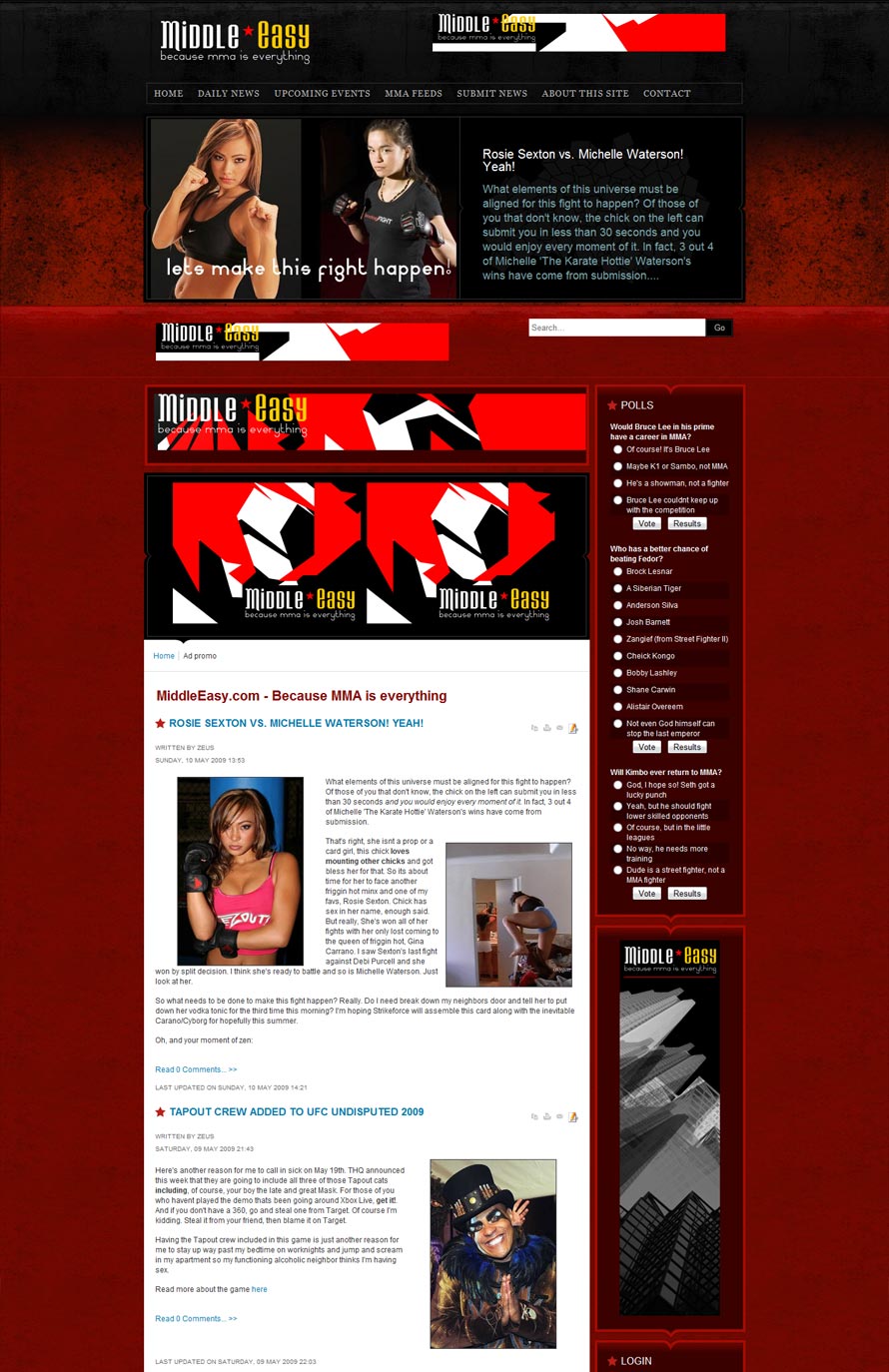 Then it changed to this… 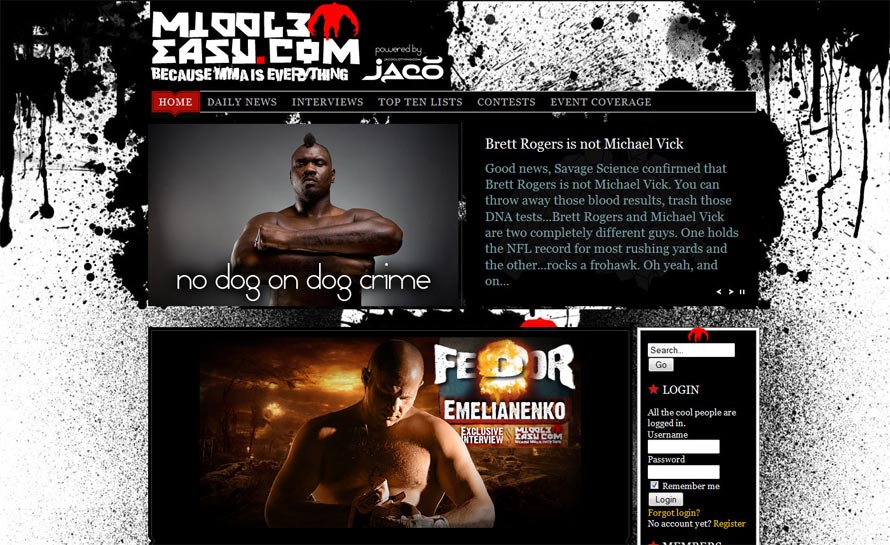 Then we updated the background, changed our color scheme, and switched to this… 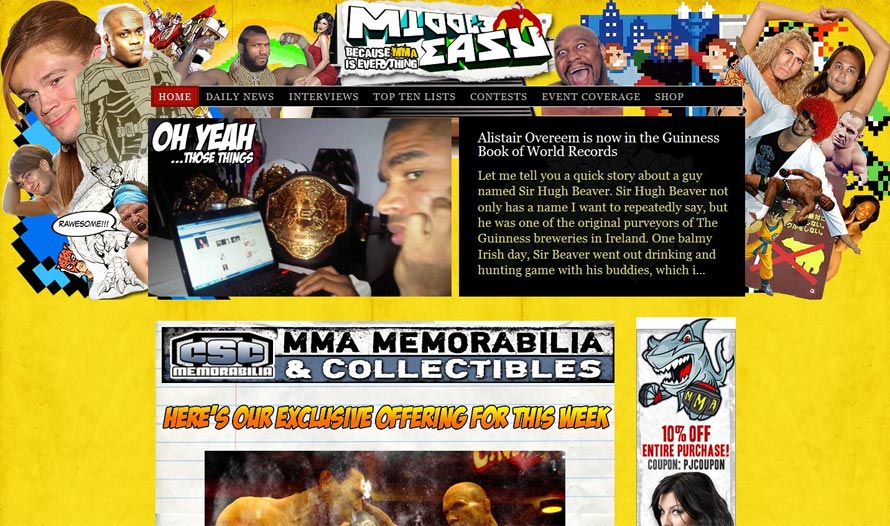 We then updated our CMS, went full throttle with the MiddleEasy Network, and made this…

Then we went to this design for about a week, and it made our entire site inoperable. 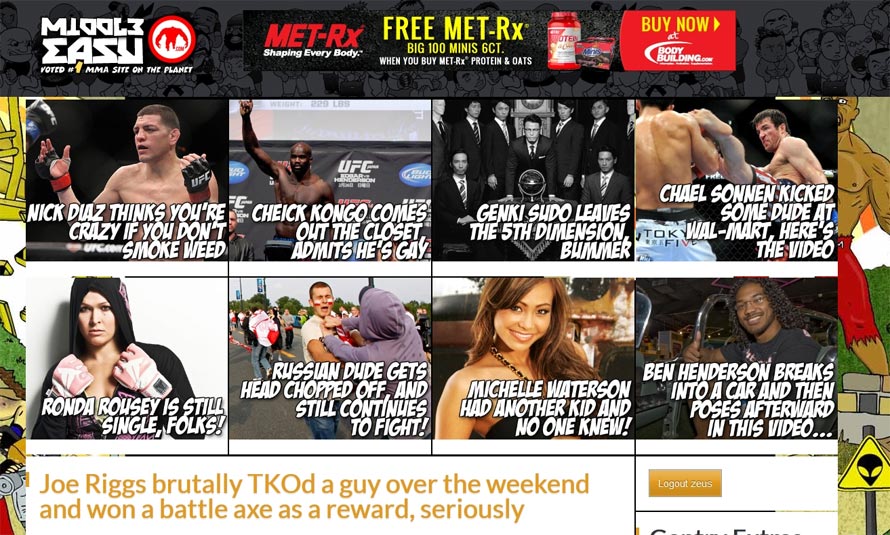 So the MiddleEasy you’re on right now is actually the sixth incarnation of the site. Pretty nuts, egh?

In the beginning of 2010 MiddleEasy was carving its way into MMA history and it got the attention of AOL, which at the time owned Fanhouse’s MMAFighting. Around this time AOL was dumping fortunes into ensuring they were the primary destination for MMA in the world, in fact whenever the UFC visited California they placed every member of their staff in pretty swank hotels in Beverly Hills with some decent expense accounts.

AOL reached out to me when I was driving from North Carolina to California to relocate, and we discussed AOL acquiring MiddleEasy and all of its assets (which at the time weren’t that much). They made a verbal offering, detailed what I would receive in the acquisition, and I turned it down. Later that day I received another phone call with relatively the same deal, but I once again turned their offer down. Without getting into too many details, they wanted to buy MiddleEasy and replace the staff with some of their existing bloggers, but they wanted to keep me as the editor-in-chief. Couldn’t do that to my staff, so the deal was a no go.

4.) Some asshats in Australia stole the MiddleEasy logo and look

There’s a really subpar movie studio based in Australia that makes equally subpar movies. They’re responsible for a few horrible B-Horror movies (all of their movies are horrible, actually) that no one has seen, and in 2011 a MiddleEasy reader noted that they stole the MiddleEasy monster and used it as their logo. I visited their site and it was so blatant that I had to contact the owner of the company. His response was something along the lines of ‘Well, we’re in two different countries and there’s no threat of brand confusion.’ What a dolt.

When we migrated to our new design, this movie studio also moved to a new design, one very similar to what we have. Heck, they’re even doing top ten lists just like us. 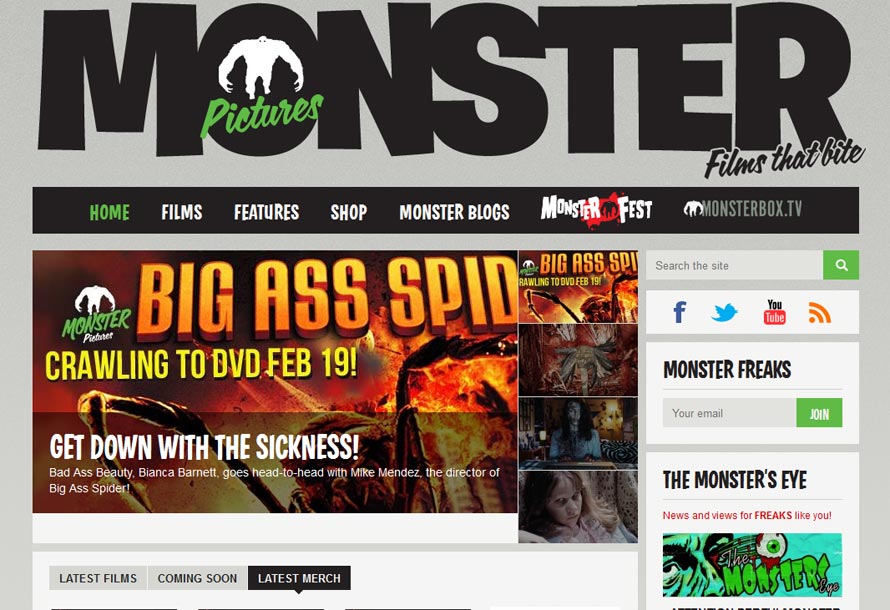 3.) An MMA gym owner threatened to have me murdered

This happened at the end of 2012, and I still have every email this person has sent me. I could publish it here for you guys, but this person would get into severe trouble with the law, and just be exposed as an overall douche for the things he/she said. However this gym owner claimed I owed him $20,000, and when I didn’t pay, he threatened to have me killed. I knew nothing would happened since this person loves hearing the sound of his own voice, so I brushed off the threats.

Needless to say, since this person threatened to have me murdered, I haven’t been back in or near the gym.

How many of you remember the great MiddleEasy Server Crash of 2012.

Ugh, it brings back so many rancid memories that I love pretending like it never happened — but it did.

Towards the end of 2012, I decided to update the look of the site by adding a lot of this cheesy Web 3.0 stuff people rant about on the net. In order to do this, we had to overhaul out content management system and update it by two full versions, which is pretty unheard of in the CMS game. So I began building the site on my computer, and I became so confident in the redesign that I took MiddleEasy down for a weekend while I finished resdesigning in order to launch the new site.

Yes, I took down MiddleEasy while I was still designing the new site. What a bonehead move. I pulled an all-nighter perfecting the design, and then I launched it on Saturday morning. While it worked fine on my computer, when hit with the rigors of thousands of people viewing it on the internet, the server virtually nuked. I remember the CPU resources were 1400% higher than normal, and most hosting company told me they would have to temporarily shut down MiddleEasy in order to protect the server hardware because they ‘smelled something funny’ coming out of the fan.

Supremely confident with my own tech knowledge, I started troubleshooting why the new site was more intense than the previous incarnation. This went on for 48 long hours, and I didn’t sleep. I hired a developer to help me out, but his only solution was that the site needs to remove at least half of our archived pages from the internet, and of course that’s just something we couldn’t do.

After getting very little sleep, I decided to revert to the old site, but I was a complete idiot and didn’t back up the old site. Not only that, but due to me tinkering with the server, our article database suddenly became corrupted, meaning everything we ever wrote on MiddleEasy was technically lost.

Things looked bleak, but one of the customer reps at the hosting company was a fan of MiddleEasy, and spent two days on his own time trying to fix our database, and he did. As far as the old design, I had to completely rebuild it from scratch.

On October 26th 2012, after a string of sleepness nights, I finally restored MiddleEasy, and you can read about some of the sleep-deprived hallucinations I experienced here.

In 2012 I DMed @SpikeTV about a ‘MiddleEasy TV’ show idea that we wanted to get on the channel. Days go past, and they tweeted to me they couldn’t respond back because I didn’t follow them! Eventually we get in touch, they give me the contact info of an exec at Viacom, I pitched the idea and they gave us a lot of cash to get the idea done. Jason Nawara, myself along with Patrick Fogatry produced this a ‘half-episode’ for Spike TV of MiddleEasy TV. We also recruited the talent of @MMAGirls to be the host of the show, along with Sweden’s Dubmood to create the tunes, and New York artist Kenneth Tin-Kin Hung to create most of the visuals.

Everything went well until we discovered during our development of the show, Spike TV decided to get out of the non-Bellator centric MMA shows. The show was canned, and we were supremely bummed out.

This is what we made, and what you’re about to see has only been viewed by a handful of people, including Viacom executives. Enjoy and long live MiddleEasy!