The Sarah Kaufman Train…hop aboard

Last night the ‘Sarah Kaufman Train’ rolled through town and I had to buy a first class ticket. The Sarah Kaufman train consists of iron reinforced countertops and slippery floors so that when you fall, it would be a guranteed knockout (or doctor stoppage). The Sarah Kaufman train is the most frustrating thing to get off of because even if you try, the doors will close forcing you to get hit on every inch of your body with steel wrecking balls disguised as human hands. Screw that, I’m never getting on the Sarah Kaufman train…maybe the bandwagon.

There’s a reason why Kaufman is undefeated with a record of 10-0. Just refer to last night as evidence of her path of destruction. Josh Barnett trained Shayna Baszler for months to do everything possible to exploit Kaufman (which is apparently nothing). Even with a knee wedged into Kaufman’s veins like a ‘Pizza Burger‘ clogging up her arteries, somehow she got out entirely unphased. She tried to take her to the ground but Kaufman apparently is half woman, half tree trunk. In fact, if we found out that Sarah Kaufman actually came from the planet Krypton, I wouldnt even be surprised. That would be like saying ‘Hey Zeus, Kristin Kreuk loves you’. I already know that, everyone does.

A lot of people say Tara LaRosa is like the female Fedor with a record of 16-1, but how can anyone ignore the fact that not only is Sarah Kaufman undefeated, but 80% of her wins came by knockout. Knockout. The chick should get a contract with American Steel Industry because he hands are obviously composed of pure iron (it’s the only thing that makese sense). 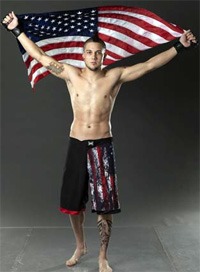