The newly released One FC: War of the Lions card has Imanari on it, so we’re beyond excited

Regardless of whatever bromance you have with Georges St. Pierre, my current bromance with Masakazu Imanari is greater. Everything that could ever be said about Imanari was published in our Top Ten Fighters that NEED to be in EA Sports MMA list so you should direct your cursor to the link and use your index finger to click it. When I was in the car with Shinya Aoki in Singapore, I made it abundantly clear that I have a strong fascination with Masakazu Imanari. Shinya and his mom laughed at me. Imanari goes by ‘Ashikan Judan’ which roughly translates to ‘The Master of Leglocks’ and if you’ve seen any of Imanari’s highlight videos, then that moniker is 100% accurate.

Now that Imanari has officially been placed on the card for One FC: War of the Lions, we will stop at nothing until we get an exclusive interview with the DEEP bantamweight champion — which means flying to Singapore and stalking Imanari until he eventually gives in to our demands.

As always, MiddleEasy will be your headquarters for all One FC news, and you definitely want to check back tomorrow for a One FC/MiddleEasy contest that will spark all of your creative brain cells — even the ones you accidentally killed this past weekend.

If you don’t live in Singapore, don’t worry. One FC: War of the Lions will air March 31st via OneFC.com, so there’s no excuse for you to miss out on this card. 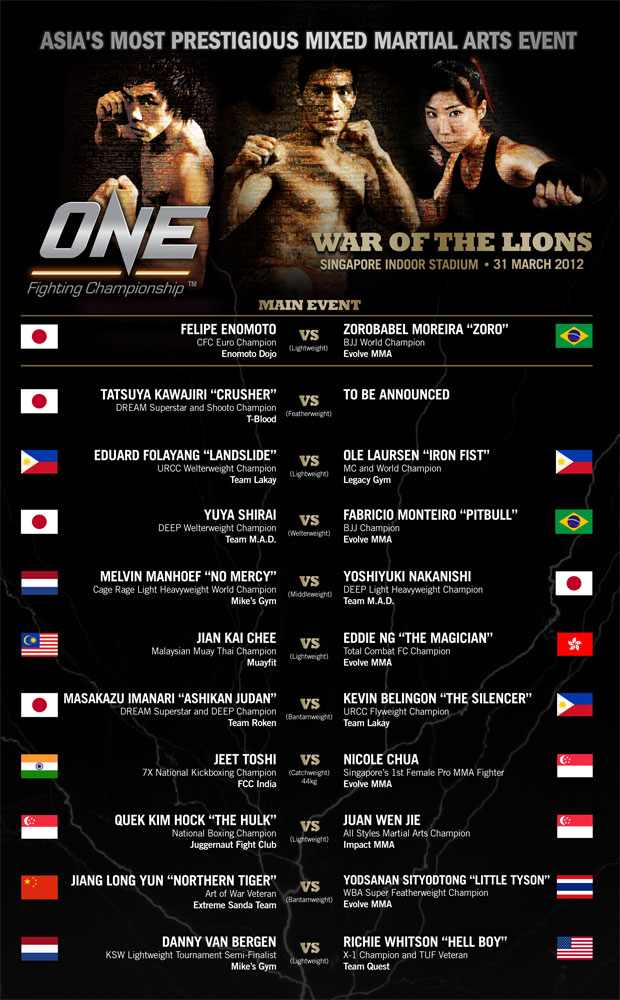 The winner of Nate Diaz vs. Jim Miller will get a shot at Ben Henderson for the UFC lightweight title
Read Next Post →
Click here to cancel reply.