The meanest vegetarian at 155lbs gets the W 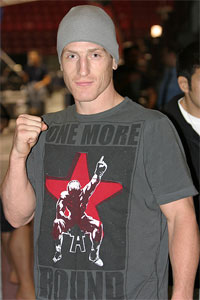 Mac Danzig used a few those elusive 12-6 elbows that disqualified Jon Bones Jones against Matt Hammil but it didn’t even mater. Danzig threw more combinations than a year’s worth of Burger King value meals. That was my Micheal Schivalelo shout out for tonight. It wasn’t as impressive as when he says stuff like ‘He has more muscles than a seafood platter’, but I’m early in my Schivalelo training. Give me a couple years with a good camp and my Schivalelo will be strong amongst the MMA world.

Props to Mac Danzig on his unanimous decision win tonight against Justin Buchholz tonight and his strong conviction of not eating any animals or using any animal products. As I type this, I’m finishing off half of a chicken kebab that has been sitting on my table for just about…two days. It’s cool. Kebabs never go bad, it’s like the Twinkies of edible meats.

Jake Paul My Boxing Skillset is Better than Conor McGregor, Masvidal, and Askren