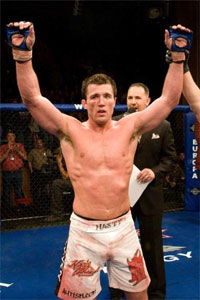 Ah, damn. Chael Sonnen is not a gangster from Oregon. It looks like everyone can finally throw away their orange and green do-rags and stop claiming whatever turf in Oregon. Dedrick Muhammad from The Huffington Post has contacted Oregon press to verify if Chael Sonnen made the recent xenophobic statements on his Twitter, and it looks like we’ve all just been trolled.

What we do know about Chael Sonnen is that he is the number one contender for the Ultimate Fighting Championship’s (UFC) middleweight title and a Republican nominee for the Oregon State Legislature. In the UFC, Chael Sonnen has become better known for vitriol and increasingly racist sounding messages on twitter than his fighting ability. Now I am waiting for these xenophobic and scathing public pronouncements to bring him infamy in the political world where he is also competing.

I see this last tweet as racist and xenophobic and was wondering how a candidate of a major party for the State Legislature was getting away with this. So I reached out to some Oregon press asking them why they haven’t challenged this candidate on this type of talk. A reporter I emailed said he would take up the story. A couple of days ago he emailed me and said that Sonnen denied that he ever made the statements and that the twitter account is a fake one.

This has amazed me. Almost every major MMA website has quoted for months from this now allegedly fake twitter account and commented on the derogatory statements attributed to Sonnen, yet I have not seen one public denial of the twitter account or the xenophobic statements. It looks very suspicious that Sonnen, only when a story is being written that could have negative consequences to his political career, quietly denies these widely cited comments.