The ‘Fedoreem Saga’ that has just begun 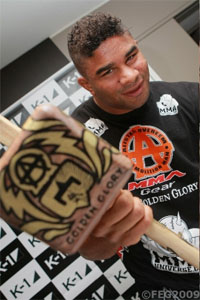 Ever since the Olympics came to prime time television, my DVR has been confused and begun acting like a diabetic child at a candy store. It records 30 minutes of something, stops, then starts recording something different. I have the first 13 minutes of Family Guy, 11 minutes of Best of Pride, but thankfully I got all 59 minutes of Emeril Live and now I know how to make Paella. Too bad the Food Network has never done a cooking show with horse meat recipes. I’m sure horse is relatively inexpensive, it’s what transformed Alistair Overeem into the genetic-anomaly we simply address as ‘Ubereem’.

‘The Demolition Man’ has said on numerous occasions that he intends on defending his Strikeforce Heavyweight belt against Fedor at some point in 2010. Although Fedor is slated to fight Fabricio Werdum in May, Shedog is now reporting that Fedor could be ‘absent as his management attempts to re-tool terms of Emelianenko’s existing contract with Strikeforce’. Additionally, FEG President Tanigawa has made it clear he wants Ubereem to fight for the vacant DREAM HW belt just as soon as he can find a worthy opponent.

This all comes on the morning we’ve been told to expect a ‘Big Announcement’ from Strikeforce according to this past Saturday’s Showtime broadcast.

To put this in perspective, if Fedor vs. Ubereem goes down in Japan, it could unify 3 separate MMA world titles with the WAMMA, Strikeforce, and DREAM Heavyweight belts. That’s like ordering a medium one-topping pizza and having Dominos throw in the keys to their global headquarters for free. It’s hard to deny either fighter the #1 ranking, especially considering the path of destruction and disarray these two heavyweights have left behind. Unfortunately, we live in an era of performance enhancing-drugs and Apy Echteld (on behalf of M-1 Global has said that Fedor is only interested in fighting Ubereem if he can pass a drug test. This is like Pacquiao vs. Mayweather all over again, and is likely to complicate negotiations).

Although Alistar Overeem never tested positive for steroids when he competed as a light heavyweight, Ubereem has been competing in Holland and Japan, where they ran out of test tubes for drug testing, and never bothered to order any more. We don’t know if Ubereem uses performance-enhancing drugs (like this stuff keeping me awake for the past 3 days from KingofCaffine.com), but we do know that he’s put on about 40lbs of raw muscle in the past 2 years and he looks like someone mixed that ‘Overeem’ fella with one of those canisters of mutagen from the Teenage Mutant Ninja Turtles movie.

If a fireman earns a certificate of bravery for rescuing a cat from a tree, the winner of this fight will probably get a throne made of unobtainium atop a mountain where the words leaders will kneel before him and await instructions on how best to negotiate world peace at the next G8 Summit. Either way, this fight needs to happen, even if it’s just for bragging rights (and a lot of money). [Source]