If your imagination takes you to a cacophony of disproportionate celebrities battling it out for one night in a Hollywood amphitheater converted into a full-fledged fight arena, then I would say you obviously hold Green Lantern’s Power Ring, because tonight it was willed into existence. Tila Tequila vs. a legal prostitute from Las Vegas’ ‘Bunny Ranch,’ Jose Canseco vs. Lenny Dykstra, Lou Bellera vs. Joey Buttafuoco — even Coolio and Octomom boxed on this bizarre card (not against each other, of course). However the cerebral-nuking moment of this entire card was a surprise bout assembled on less than a week’s notice. Tank Abbott vs. Kimo Leopoldo took place at The Avalon in Hollywood, California just hours ago. Unfortunately I wasn’t able to make it to the event, but 8CN reported on what it appears to be the scientific definition of ‘absolute confusion.’

As if the card couldn’t get any odder, Tank Abbott and Kimo Leopoldo squared off for three, one minute rounds wearing head gear and some hefty looking gloves. In the end, it wasn’t even clear who won, but the fans in the crowd appeared to be the big losers of the night.

To cap off the foul language broadcast, there was also a scantily clad Ron Jeremy acting as a ring girl, a sword swallower, midgets, and the largest boxing gloves ever seen.

Perhaps the biggest disgrace of the night though was that the broadcast actually announced both Abbott and Leopoldo as former MMA champions…..guess I slept through those title reigns, which is something most fight fans probably did through this event.

And it seemed like it was just yesterday when Tank Abbott was brawling in the backyard of someone’s house while something slowly burned in the backyard (seriously, what was that?). Here are a couple photos snapped during the event by TMZ’s Peter O Riordan. If a video gets out of this nonsense, count on MiddleEasy to have it up — since that’s apparently what we do. Props to Dan Rose for the find. 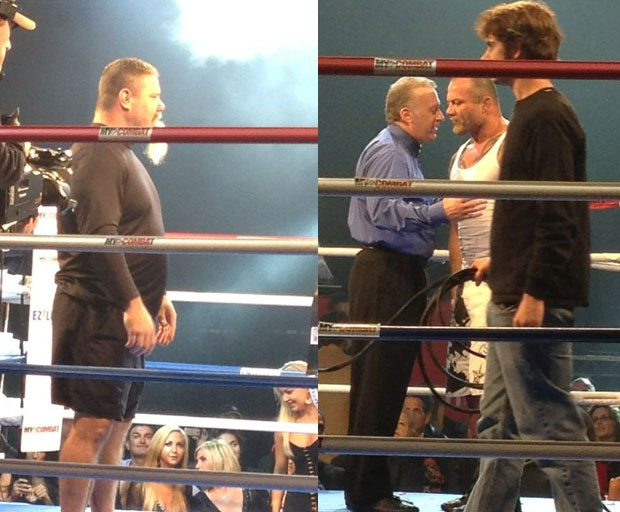