Tai Tuivasa Gets Cut By The UFC

Heavyweight Tai Tuivasa Reveals That The UFC Has Released Him

Heavyweight fighter Tai Tuivasa has been on a bit of a skid lately. Unfortunately this seems to have resulted in him being cut by the UFC.

In his relatively short UFC tenure, Tai Tuivasa has become a bit of a fan favorite. In three years he gone 3-3, with a notable win over Andre Arlovski. However it was his exciting personality, and propensity for drinking beers from a shoe, that earned him a bit of notoriety in the hardcore fanbase.

As it happens, all three of the losses that Tai Tuivasa has suffered in the UFC, came in his last three bouts. This type of frustrating skid often puts people on the chopping block, and he was not different. Responding in the comments of an Instagram post, he revealed that he was cut by the UFC. 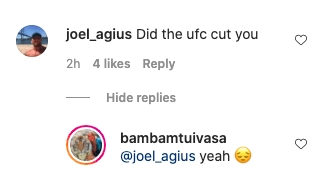 This is extremely dissapointing for the 27-year old Tuivasa to be cut by the UFC. He had shown a lot of promise early on, and there is an argument to make that he got pushed quickly by the UFC. On the other hand, his last loss was a rather one-sided submission to Sergey Spivak, that did not look great.

At the end of the day, Tai Tuivasa is still pretty young, especially for the heavyweight division. Having him get more experience in an organization like Bellator could lead him back to the UFC at some point. He definitely seems to have a lot of potential, and could offer a lot to another promotion.

Justin Gaethje Vows To Take Khabib To A 'Zone Of Death'
Read Next Post →
Click here to cancel reply.