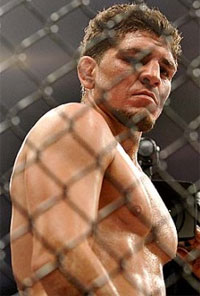 If you’re a guy that likes to mean mug the peeling off an orange and is a self-proclaimed master of nunchucks, then Nick Diaz is the perfect role-model for you. I don’t think anyone expected Nick Diaz to ‘set an example’ in any capacity when he finished Shamrock and then yelled at the Strikeforce guy to bring him his shoe. Dude’s from Stockton, California and Nick Diaz giving someone the finger is just the way people in the 209 say ‘hello’. When Mayhem Miller said Nick Diaz was ‘so stupid it’s hilarious’ on Mayhem vs. The Voice, it took Nick Diaz approximately 12 hours to record his own response complete with double middle fingers.

Tonight on Tapout Radio, Cesar Gracie said that he would be open to letting Nick Diaz fight Mayhem Miller at a catchweight, but the bout was never offered to them.

‘We’ve never been offered that fight. Some people may be saying ‘are you ducking Miller?’ but we’ve never been offered that fight with Miller. He didn’t duck him. It was brought up in a brief conversation with Strikeforce…it was agreed that whoever they want to put in there, it was their decision. As our contract works, if there’s a different fight that Nick has to go move up in weight, well then there’s some negotiating room and what I can say is that if you do pick Miller, I would like to see it at 170. If Miller can’t make 170, we’re very open to a catchweight however for Nick to have to go up in weight to 185 to accommodate Miller, it just doesn’t make sense.

“Number one, Miller’s record doesn’t justify anyone having to come to him. His last five fights he’s won twice. Nick won seven in a row, he’s a champion. It’s more of a fan-favorite fight so we’ll do it, but probably at a catchweight but if Miller isn’t willing to do that , then ‘don’t be scared homie’ may apply to him.”

“What if he called out Gilbert Melendez, would he tell Gil to move to 185 so he can fight? Its ridiculous. Why even bother to call him out? I would probably ask to fight someone more important in the fight world today if Nick is moving up to 185. We’re above that.”