Steven Seagal confuses the world with his opinion on MMA 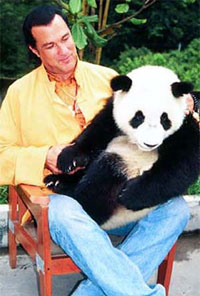 Whenever I feel the need to inject caffeine into my body via a fruit flavored drink, I always go with the one that has the face of a guy that single handedly saved the world from terrorists while rocking a chef outfit. Under Siege 2 was cool because it involved satellites and Native Americans. The only thing I remember from the first movie was that topless chick jumping out of the cake and my friend Cameron stealing my X-Force comic (both of which happened on the same day). When I was a kid, topless chicks meant something. They still do, but they used to too. Check out what Steven Seagal said in a radio interview when asked about the rise of UFC.

You know they’re kind of mixed feelings I feel that the martial arts is should be something to train you to have character and humility and really not show the end of martial arts that people would start to believe that they’re just there to hurt people because they’re really suppose to be there to help people but at the same time it’s certainly teaching people great skills so it’s kind of a mixed feeling.

You don’t have to pretend like you understood that. It’s cool, we all felt a little tumor form in our head after reading that. At least Steven Seagal still has the most entertaining show on TV.  [Source]