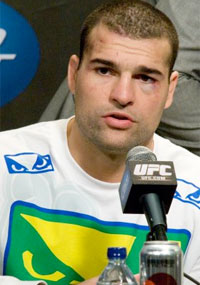 Hopefully by the time you read this, you will have found a nice comfortably place in hell (thanks Cecil Peoples). Remember that dead horse everyone has been kicking? Yeah it resurrected itself and now the Shogun/Machida controversial has officially entered Shogun’s court. In an interview with Gazeta Do Povo, Shogun says that he believes he won the fight and the fault isnt with Machida…it’s with the judges.

“You just have to look at my face and his (Lyoto). I didn’t suffer one kick, only some knees but he has a rib broken neither get to walk and his mouth is stitched. They made some fighting analysis and I landed the double of hits. Will the judges say they didn’t see that? They will speak anything to justify the result. I feel pissed for my score (18-4), I prize a lot for it and I don’t consider this loss. I didn’t meet Lyoto after the fight but he’s a man I respect so much. He’s blameless, it’s judges’ culprit. Only them say the fight that way. I don’t blame Machida at all.”

Alright so a lot was lost in translation (props to MMAMania) but from my limited English comprehension, it’s pretty easy to discern that Shogun Rua won the fight and according to Cecil Peoples…he will join you in hell (leave a seat open for him). [Source]