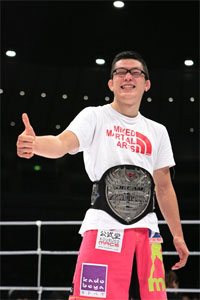 Some of you know about Pride- The Secret Files, a book released by Kamipro that discloses thirty secret projects that were planned by Pride FC just before their 2007 demise. We’re talking about serious stuff folks. Mike Tyson vs. Mirko Cro Cop, a TUF-like reality show and Georges St Pierre and Kimbo Slice competing in a Pride grand-prix. The book was a daily reminder as to what Pride FC could have been if it were not for all of those alleged Yakuzas dipping their hands in Sakakibara’s pocket. Everyone has their own variation of what killed Pride FC, including Bas Boon who told us that M-1 Global is somewhat responsible for the collapse of the organization.

There’s been an effort in the Japanese MMA community to translate and transcribe the entire book in English and MMA-Japan has led the effort in 2010. Today, they’ve released an interview with Shinya Aoki in which he claimed that the UFC offered him a contract with his first fight being BJ Penn.

“I wanted to achieve something in the fight sport. While I was attending police college, an offer came from the UFC.

It came through a foreign connection I had. They offered a certain amount of money and said my opponent would be BJ Penn.

I consulted with him [Hasegawa] about the UFC deal. I said, “This offer kinda came in from the UFC. I’m thinking of accepting.” He said, “Wait a moment. If a fighter is doing it all the way, he should be doing it all the way. There are better roads to take. You should think about this very carefully. You should avoid just going to America and signing a contract.” If I had just gone without talking with him, and thinking it through, and fought in the UFC, I do not think I would have ended up in the position I am in today.

If Hasegawa was not there, it would have been. I probably would have not been with PRIDE and I would not be who I am now.”

Sorry to dig my hand deep within your chest cavity and rip out your still-beating heart with this news. It could have happened, it didn’t — and probably never will. Absolute bummer. [Source]