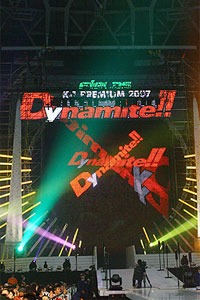 Earlier this year the owner of FEG (K-1, Dream) told Fighters Only Magazine that he will eventually buy the UFC one day. Whenever you can make a statement like that, you’re probably not obsessing over dropping $18 for a midnight showing of Twilight: New Moon (it was like stepping on an estrogen landmine). FEG is like the Japanese ZUFFA however unlike ZUFFA…these dudes are willing to co-promote.

During Sengoku 10, the organization announced they were changing their name to the astronomically cooler ‘Sengoku Raiden Championship’ and that they would be promoting an event the same time as FEG’s Dynamite!! 2009. If you’re not familiar with Dynamite!!, just imagine stuffing a blender with thermite, plutonium, high kicks and red kryptonite, setting it to ‘rawesome’ and throwing the mixture right in the middle of the Saitama Super Arena. Everyone from Brock Lesnar to Fedor Emelianenko has participated in this bangemite fest known as Dynamite!! (can’t forget the two exclamation marks or the entire universe will collapse…and it will be your fault). So it goes without saying that when Sengoku announced their head to head NYE event, beef started to ensue.

Sengoku’s headliner was 2008 Bejing Judo gold medalist Satoshi Ishii making his MMA debut against old school 1992 Barcelona Judo gold medalist Hidehiko Yoshida. 22 year old vs. a 40 year old, almost reminds me of the time my father challenged me to a boxing match in my backyard after I told him his double baked macaroni and cheese was garbage (true story). Everyone was stoked, Sengoku purchased a 4-hour time slot on December 31st and out of no where Sengoku’s main sponsor, Don Quijote, jumped ship to FEG’s NYE Dynamite!!. A big ‘holy crap’ was heard from Sengoku’s office and plans for the entire event started to fizzle. World Victory Road (Sengoku’s parent company) ceased ticket sales and they officially announced their NYE event will not take place at the Ariake Colosseum.

Now FEG president, Sadaharu Tanikawa has announced in Kamipro that a DREAM vs. SRC co-promotion are in the works for NYE and that it will probably be in a 5 vs. 5 or 7 vs. 7 format. He also mentioned that there will be no Sengoku/Dream merger and that World Victory Road will continue to have Sengoku matches that are independent of FEG. It looks like the Sengoku/Dream Voltron will be a one-time thing so whatever house party you end up at for New Years, make sure they have HDNet so you can watch Aoki come out in his traditional epileptic seizure inducing pants. [Source] 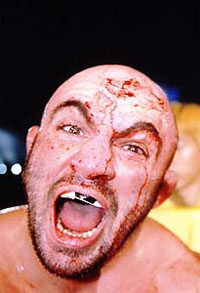