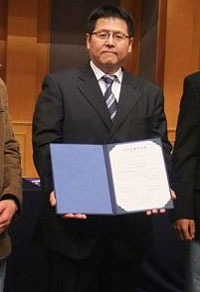 For the first time in history, a business uses entropy as a means to defeat another company and dominate their respective market. After Doomsday killed Superman sometime in the early 90s, a resurrected Superman teamed up with a time-shifter known as Wave Rider. Knowing that they couldn’t defeat Doomsday through conventional means, they employed a variety of weapons including an ultrasonic gun and an energy sword, all of which failed. In a desperate attempt, Superman used one of Wave Rider’s time-traveling devices to transport Doomsday to the end of time. The only thing that could stop Doomsday from taking over the universe was entropy, and Sengoku plans to use the same tactic against FEG/Dream. That Superman story also serves as an ineffective pick-up line.

Sengoku recently outlined their business strategy for the remainder of 2010 and early in 2011 in a Ustream broadcast. Along with outlining the pay structure of their top fighters, a Sengoku representative also stated that they plan on waiting for Dream to ‘self-destruct‘ so they can dominate the world of MMA in Japan.

“Sengoku is strong. We need only to wait for Dream to destroy itself, we will become the top Japanese MMA organization by not doing anything.”

In the same broadcast, Sengoku stated their top fighters will earn anywhere from $3,420 to $11,400 per fight. Compare that to the $400,000 Brock Lesnar made at UFC 116, a payout so large that Jorge Santiago, Sengoku’s middleweight champion, would have to fight approximately thirty-five times in the promotion just to equal what Lesnar pulled against Shane Carwin earlier this month. [Source]

Genki Sudo's 'R246 Story' has been released on DVD and here's the poster
Read Next Post →
Click here to cancel reply.