Scott Coker is cool with Jake Shields appearing on TUF 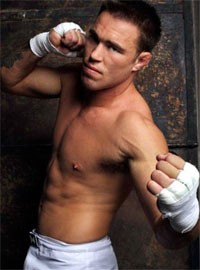 I first met Scott Coker at a breakfast buffet. I didn’t know what to tell him, so I elected to go with ‘Nice waffles, where did you get those at?’. Scott pointed down the buffet line and I grabbed my tray and migrated over there. That was the moment I realized that a waffle is made up of little hotel rooms for syrup. Coker didn’t quite have the same earth-shattering epiphany I had that morning, but he realizes that Jake Shields appearing on the upcoming season of The Ultimate Fighter can do nothing but help the Strikeforce brand.

“Jake is always looking for more exposure, and try to increase his brand as an individual. When I heard about it, it was like when Robbie Lawler was doing The Ultimate Fighter when Matt Hughes was coaching. We see it as no different, and Chuck asked him to be the coach, and where Jake trains it doesn’t matter. Just make sure that he’s training cause he’s going to be fighting Dan Henderson in April”

Am I the only person that stays up at night and wonders what happened with the post-fight beef between Jake Shields and Mayhem Miller that eventually resulted in Shields claiming Mayhem beats his girlfriend? Yeah, I’m the only one? Well maybe I really do need to get a social life. [Source]

The Best Part of Waking Up... Is Fedor In Your Cup
← Read Last Post

If you're going to bash the UFC, at least spell it correctly
Read Next Post →
Click here to cancel reply.