Satoshi Ishii has turned down a spot at Dynamite!! 2010 and wants to fight…Tito Ortiz! 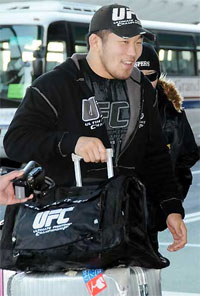 In a fight that could only be described as the battle of the above-average craniums, Satoshi Ishii has turned down a slot at Dynamite!! 2010, and instead wants to fight Tito Ortiz on New Year’s Eve. Yes, all of that makes as much sense as a tap-dancing Mongolian death worm, but it does not negate the fact that it would be a novel concept (just like a Mogolian death worm — those things don’t exist by the way).

After his K-1 MAX bout against Shibata this morning, Sports Navi interviewed the Olympic gold medalist judoka to see what his future aspirations were, specifically to confirm if he was indeed fighting Gegard Mousai at FEG’s Dynamite!! 2010 (something that Mousasi mentioned to us last month). Not only did Satoshi say that he had no interest in fighting in the event, but he also said that he wants to immediately travel to the United States to train, pick up a potential acting role with Ken Watanabe (he was great in Inception) and fight Tito Ortiz on New Year’s Eve. Granted, Ishii is claiming he wants to fight Ortiz in order to negotiate a contract with FEG, but it wouldn’t be the first time Satoshi flirted with joining the UFC.

After snatching the gold at the 2008 Beijing Olympics, Ishii announced that he wanted to try his ‘head-first slamming abilities’ in mixed martial arts and started by challenging Fedor to an MMA bout. That was somewhat of a step-up in competition, so FEG approached him to sign on a Dream card early in 2009. Satoshi Ishii essentially said, ‘screw it’, rejected their offer and moved out to the US to train with American Top Team. When that was over, he moved to Brazil to train with Lyoto Machida. After spending a few months rolling around at Xtreme Couture in Las Vegas, Dana White personally invited him to Vegas to try to nail out a UFC contract. The two met, probably shot guns together in the Nevada desert, and they simply could not agree on a contract. The rumor was that Satoshi Ishii wanted an immediate title shot, Dana White negotiated that he would take on a top five opponent and it just wasn’t enough for Ishii. If Satoshi did transition to the UFC in 2011, he would be fighting at light heavyweight, which would also mean that Japanese MMA would be out of yet another prized possession. Bummer for Japan. [Source]