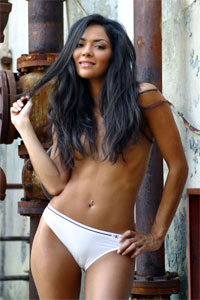 So it looks like Sarah Ponce may have just been signed by Strikeforce while you were stuffing your face with leftover turkey sandwiches and bricks of stuffing. Here’s a set of unsolicited digital cliff-notes to get you up to date on the rawesomeness that is Sarah Ponce. She started her career in kick boxing racking up an impressive record of 12 wins and only one loss. Sarah holds a total of 4 kickboxing titles and she currently teaches and trains out of a gym in Houston, TX. In 2003 she was named Ujena model of the year (yeah, we don’t know what that means either) in which she traveled across Europe sprinkling the world with her ridiculously perfect body. Sarah ‘Sugar Foot’ Ponce also competed in something called World Combat League (Chuck Norris invented it) where she racked up an impressive score of 15 for her team the ‘Houston Enforcers’ (think IFL but with really hot chicks). In 2008 she competed in the Bejing Olympics in the Women’s 60kg Wushu Tournament (unfortunately she was blown out in the first round by an Egyptian chick named Walaa Abdelrazek).

Today I got a call from a guy that trains at her gym in Houston and he overheard Sarah Ponce and her trainer (guy named Mike Altman) discussing her future participation in the Strikeforce 135lb tournament which will be held sometime in 2010. Sarah usually fights at around 123-130 so she’s going to put on a little weight. Judging from your reaction to the picture on the right, you’re fiending for me to provide some more pictures for you. Alright, take it easy. Here is one of her doing something with her hair, one of her in underwear, another of her in a nice little fight pose and one of her just generally being hot (oh, and this one). There, now you have something to obsess over for the weekend. Enjoy. 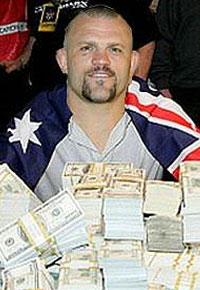