It is safe to say that One FC is looking to bring the most interesting fighters that they can to Asia, and there is no better proof of that than analyzing a fight like Rustam Khabilov versus Rodrigo Ribeiro at One FC 2 in Jakarta, Indonesia. This fight is a classic clash of styles, but this time around it is a clash between two grappling arts, with Russian Combat Sambo going head-to-head with the MMA favorite in Brazilian Jiu-Jitsu. It is also a clash of fight teams, with Khabilov fighting out of Jackson’s MMA in Albuquerque, New Mexico in the US and Ribeiro fighting out of the Evolve Fight Team in Singapore.

If you were to look at the prospects involved in One FC, it is impossible not to see Rustam Khabilov as one of the hottest prospects around. The Russian welterweight comes in with a 12-1 record, with 2009 being his biggest year, where he captured the M-1 Global Challenge that year. Khabilov almost made it a clean sweep as he made it to the finals of the 2010 M-1 Challenge, only to ultimately drop the decision to Ruslan Khaskhanov, suffering his first and only loss. His debut fight in One FC marks his first fight not out of Russia or Europe and will be one of his toughest challenges to date. 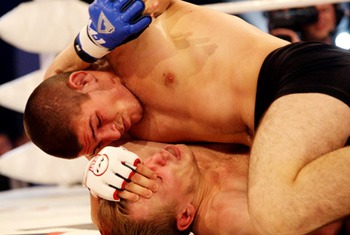 Khabilov brings with him the style of Russian sambo, holding World and Russian Combat Sambo championships. If you are unfamiliar with combat sambo, the easiest comparison to make is to Fedor Emelianenko, one of the most famous practitioners of combat sambo in the world. Samo combines elements of Judo along with wrestling and other grappling arts, with combat sambo also utilizing strikes and resembling MMA more than Judo. This means not only can you expect trips, throws and submissions, but also focused striking and a lot of brutality from combat sambo fighters. Khabilov embodies modern combat sambo inside of his MMA career with five submissions (four armbars and one triangle) and two knockouts.

Khabilov’s Sambo will clash with Rodrigo Ribeiro’s Brazilian jiu-jitsu. Ribeiro sports a third degree black belt in BJJ and has a staggering twenty years of experience as a BJJ practitioner. His record might not be the most impressive one in the world, but numbers alone can be deceiving in cases like this. As for press time, he has a 9-7 record with fifteen of those fights taking place inside of Brazil. There really is no shame in saying that you, a BJJ expert, were submitted four times in the mecca of BJJ, is there? This makes his second international fight, with him preparing with the Evolve team in Singapore.

Ribeiro’s last fight in Thailand for DARE was a solid win over Wade Henderson via first round armbar and it is safe to say that against Khabilov he will be looking to do the same thing. He tends to favor armbars or chokes, so Khabilov will have to be sure not to leave his arm or his neck unprotected. Both men have a ton of potential to be breakout stars, making worthy additions to One FC’s Welterweight division.

Guys, you only have twenty four hours left to get The Reem in UFC Undisputed 3 for free
← Read Last Post