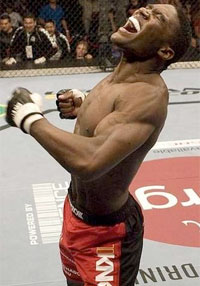 My bud’s heart dropped Saturday when University of Arizona was dethroned by Oregon as the top Pac-10 team. He called to let me know everyone in Tucson was whack and that the Wildcats lost in double overtime. He also wanted to know how his dude, Rumble Johnson, did against Koscheck. I didn’t really know what to say, he’s had a bro-mance with Rumble ever since he used him to beat me in UFC Undisputed over the summer. His night was going horrible, so I told him that Rumble did great…which is true. Anthony ‘Rumble’ Johnson definitely showed up during his fight with Koscheck except for the weird knee to a downed opponent followed by a complimentary eye-poke via Josh Koscheck. A lot of people didn’t see where Rumble kneed Koscheck in the head including Joe Rogan. Check out what Rumble had to say in the post-fight presser.

“After him poking me in the eye it made a big difference. Then he did it twice and got both eyes the second time because when he swings, he jabs with his open hand and the right didn’t even hit me, it was just the open palm strike and my eyes, my eyes are burning like hell right now.

“After I hurt him, he needed that, he needed some kind of excuse to recover, but it’s all good.”

After Koscheck’s win, Dan Hardy likened Josh Koscheck’s existence on earth to a piece of fecal matter that is impossible to dispose. Those Brits and their dry sense of Twitter humor, got to love it. [Source]