Roy Nelson says he has a very athletic build 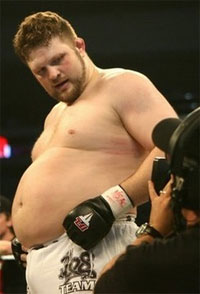 Damn. Here I am working out five times a week like some schmuck when I could have just let me belly evolve into some extra-terrestrial life form and be considered an athlete. Set aside the fact that Roy Nelson looks like his DNA has been spliced with the Gummi Bear lineage. Dude is still the reigning IFL heavyweight champion and held perhaps one of the wildest looking belts in MMA (the studded snakeskin needs to make a comeback). In an interview with MMAFighting.com, Big Country says that despite his moon-belly, he still considers himself to have an athletic build.

If stomach mass was an accurate representation of MMA skill, the dude that runs the comic book shop next to my place would have been the linear super heavyweight champion for a decade now. [Source]