Richie Whitson and that thing… 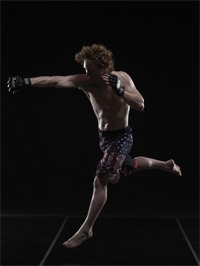 After seeing Danny Gokey get axed from American Idol finales and seeing your girl Allision lose ANTM (shut up Tom) you were undoubetedly relieved to find some television with a little bit of testosterone injected into it. So if you were like me you turned on Spike TV to watch The Ultimate Fighter 9 and were greeted to…what…a dose of herpes? Wtf was that man? Richie Whitson had this extraterrestial growth near his lip that looked exactly like herpes. Although he called it something else, if that growth of Whitson’s face and a dose of herpes went to a party and your life depended on you telling the difference between the two…you would be dead. Jason Pierce flipped out and sprayed disinfectant on everything but who wouldnt? If youre sparring with Whitson and give him an elbow, that herpes is going to explode and leak all over the mat, your face, inside your eye, between your teeth…dude, your life is over.

Unfortunately Richie Whitson’s perfect record was tarnished last night after he suffered a victory from another brit that looks like he was decended from tribe of hedgehogs. Come on USA. lets step it up next week

Kyra Gracie is mine