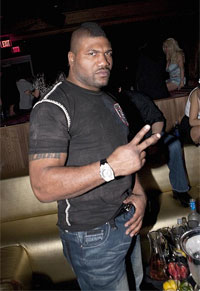 For those that don’t want to read the article and are just here for Rampage Jackson’s Xbox Live name, it’s RampagexUFCx2. I’ve already sent him a friend’s request so hopefully he will accidentally hit ‘accept’ before his Xbox ignites later today. Fighters Only Magazine sat down around a camp fire with Rampage Jackson to recollect the old school Pride days. Besides stating that the Pride GP was rigged to allow Wanderlei Silva to win he also explains why he wasn’t included in the first Pride FC game.

They put Shogun and Ninja in there and they only just came to Pride and I was already there before them. But whatever. Then they made the second video game and put me in there and that game SUCKED. It was weak, I didn’t even play it. I am a big video game guy and I played it once, I threw that shit away.

I aint gonna say my screen name because everybody… ah hell, I’ll say it. I aint gonna accept all their friend requests anyway! My screename is RampagexUFCx2 but most people don’t believe its me, they be like ‘huh, some guy thinks he’s Rampage.’ I just be laughing but some people know my voice and they’re cool.

Rampage also says that when he first hit Japan, the execs at Pride depicted him as a ‘homeless man’ that ‘ate out of garbage cans’ to increase his appeal. Got to love Pride. Those guys could sell chlorophyll to a forest of evergreens. [Source]