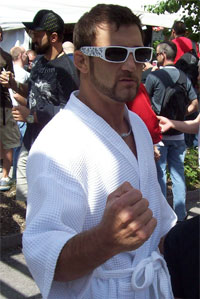 If the Wu-Tang Clan ever needed a tenth member, Baroni would be the most qualified individual in this galaxy. At the weigh-ins for Strikeforce: Lawler vs. Shields during his face-off with Joe Riggs, dude spent the entire time yelling at the camera man who tried to get him closer to Riggs. All of which happened while Phil Baroni rocked a thong, Gucci sunglasses and a bath robe. That has to count for something. At least let Baroni have a celebrity guest spot on the next Wu album (dude already has his Wu-Tang Name: The New York Badass. Add ‘Shaolin’, ‘Man’ or ‘Killah’ in there for flavor).

Unfortunately Baroni went 0-2 in Strikeforce and he was let go a few months ago. UFC wanted some of Phil and his Buick…something (which is probably the funniest video you will see today) and signed the New York Badass back into their organization. Today it was announced that Phil Baroni will be going against your favorite dude from TUF (besides Wes Sims) Amir Sadollah who got a pretty raw deal at UFC 101. If you’re in Tucson, open your window and look in the street. My friend Mike is probably doing back-flips out there. Dude has a man-crush on Amir. Mike has a bro-mance. [Source]