Maybe Strikeforce should just sign Overeem’s manager to a one fight deal with Brett Rogers’ manager so we can see…maybe not. That would be like watching my functional alcoholic neighbor in the cage with the guy that works at the bodega who tries to sell me incense every morning. I’m not saying either of them are alcoholics or ruthless…incense pushers, but the fight would just be embarrassing. They’re better off doing what they do best which seems to be attacking each other. Last month Rogers’ manager claimed that Overeem was scared of Brett stating that he had two opportunities to fight Rogers and he’s ‘backed’ out of both of them. A lot of words have been exchanged since that statement last month and now this is what Bas Boon (Overeem’s manager) had to say about Rogers:

He knocked out one of the best strikers in the world in Badr Hari in the first round under Hari’s rules (K-1). He fought three rounds against three time K-1 World Champion Remy Bojasky and would have won that fight had they counted the second round knock down. What exactly does Brett Rogers have on his record?”

Bas Boon. Dude’s the second guy I know from Holland named Bas. And while all of this is going on, Overeem waits patiently with a neatly groomed haircut and his name on a shirt. That’s baller. [MMANews.com] 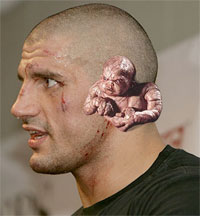