BJ Penn is the lightweight GOAT. Throughout his career he treated us to spectacular performances both inside and outside of the octagon, as well as awesome videos of him rolling giant rocks under water, and jumping out of pools. Since Sunday the hearts here at Middle Easy have all been heavy, and the bags under our eyes have us looking like raccoons. Seriously. None of us have slept. We’ve spent the last few days on a bench at the park staring blankly into space as we feed the pigeons stale bread. It was fresh when we got there. We’re slowing starting to convalesce and are realizing that we shouldn’t be sad, and instead of mourning BJ Penn’s retirement, we should be celebrating his career. BJ Penn is one of the greatest examples in MMA of a fighter’s record having absolutely jack shit to do with their skill or their importance to the sport. So in honor of one of the last of the old guard finally riding their floating pyre off into the gates of career Valhalla, here are our Top Ten Favorite BJ Penn Moments.

10.)Reminding Kenny Florian of his place

Kenny Florian is one of those guys who always seemed to come up short. With five performance awards (2x Submission of the Night, 3x Fight of the Night), and only two of his fourteen wins coming by decision, he was an exciting enough guy to watch. He just never really had what it took to be elite, and was never able to seal the deal in big fights. He lost the original TUF Middleweight tournament finale, he lost in two title fights for the lightweight belt, and he lost against Jose Aldo for the featherweight belt. He was essentially one of the most dreaded terms in MMA – a gatekeeper. I don’t hate Florian, in fact he’s a pretty stand up (pun intended) commentator, but as a fighter he never seemed to bring the intensity that earned him title shots to the actual title fights. The fight against Penn showed that The Prodigy was more than a few steps above his level, and resulted in the latest submission in a fight in UFC history at that point when BJ got the submission via rear naked choke late in the fourth round.

Okay, so the fight itself might not be too violent, but the fact that BJ Penn fought at 191 lbs. against Machida, who weighed in at 225 lbs. definitely earns it a spot on this list. Seriously, BJ Penn could have realistically saved UFC 151. Taking the fight against Machida at catchweight (which is a fairly loose term in this instance given the weight discrepancy between the two fighters) is the epitome of “Just Scrap.”

Andy Wang. Man. Legend. But most of all, warrior. Few people in the lexicon of MMA can say they have an entire way of fighting named after them, but Andy Wang inspired the ‘stand and wang’ style that has invaded our minds and hearts ever since TUF 5. BJ Penn didn’t even have to throw a punch to make this one of his best moments, he just had to cry like a little baby with a Hawaiian accent.

Ugh. Just ugh. If you watched the TUF 19 Finale post-fight press conference (if you haven’t don’t; unless you need to have your entire existence drawn into question) then you’ll remember how emotionally distraught Baby Jay got when waxing nostalgic on his career. Penn said that Frankie Edgar was his biggest rival in MMA, which was surprising to some of the media who surely thought it would have been Matt Hughes or GSP. The third fight against Edgar really made no sense, and served no purpose. The third fight against Matt Hughes made perfect sense, and was a perfect way to cap off that trilogy – with BJ Penn unleashing the fury. It also led to this picture. 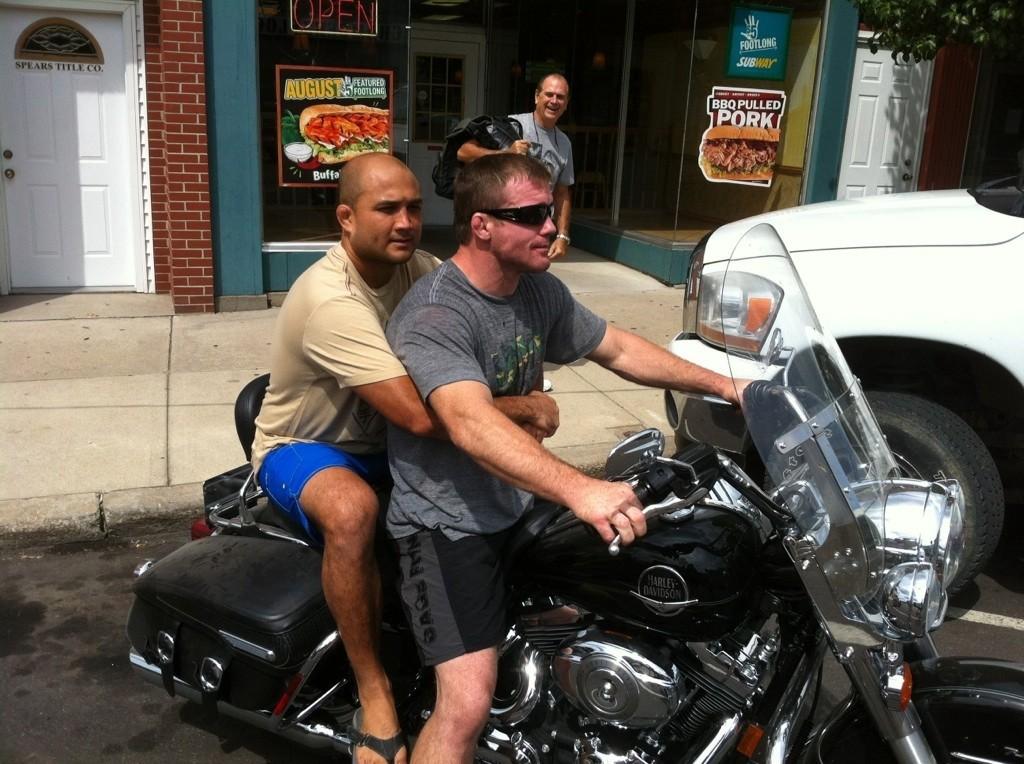 This fight! My god this fight! Never were two people for more suited to fight each other. The fight itself wasn’t just great, but everything that led up to it actually becoming a thing was as well. The build up for a Nick Diaz/GSP match up was years in the making. Remember Strikeforce? When an entire five fight card could happen within an hour and fifteen minutes? Man…Strikeforce was awesome. So right when everything was set to go Nick Diaz…pulled a Nick Diaz. He didn’t go to pre-fight press conferences, he released a weird YouTube video insulting a motorist’s mother. It got weird. But it all worked in the long run because we got to see Nick Diaz face BJ Penn, and eventually get his shot at GSP. I don’t think I’ve ever wanted a fight to end a draw so badly. 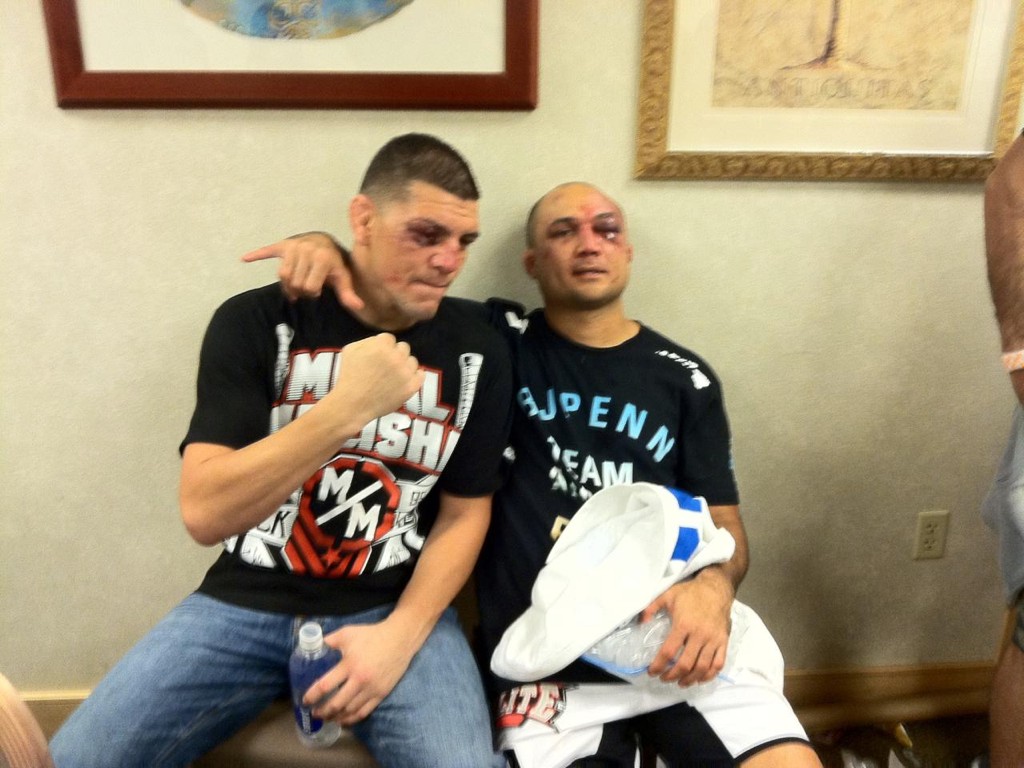 If you know the history of the UFC’s lightweight division, then you know that there was a period of time where you’d be hard pressed to the describe the division without using the prefix “cluster.” Jens Pulver was stripped of the title on March 23, 2002 after leaving the UFC because of the dreaded contract dispute, and then to further complicate the division, BJ fought Caol Uno to a draw at UFC 41. Up until this point Penn had only fought in the UFC, but he took the fight against Takanori Gomi at Rumble on the Rock 4, and whenever Gomi or Penn are involved in a fight, violence is pretty much guaranteed. BJ was able to get the W via submission in the third round with the RNC.

Anyone who has listened to Bas Rutten talk about Andrei Arlovski’s defeat at the hands of one Fedor Emelianenko knows how he feels about flying s–t. If you don’t, well it’s a simple premise really – once you’re in the air there is nothing you can do. Caol Uno came out in the opening seconds of this fight like a meth’d up lemur in heat with a…I don’t really know what he was trying to do, but it didn’t work. At all, and it only took The Prodigy eleven seconds to straight up Shang Tsung his ass.

Okay, so it’s not safe to go airborne against your opponent because it’s risky and it never pays off…unless it does. Which for BJ Penn it did against Sean Sherk at UFC 84. It’s impossible to watch a BJ Penn highlight video without seeing the end of this fight. The beautiful combination that set it up, the knee that buckled Sherk, and the barrage to cap the fight off literally at the end of round three. Seriously. The time of the stoppage is 5:00.

2.)Opening a portal to another dimension on Diego Sanchez’s head

Remember the end of No Country for Old Men after Chigurh is involved in a car wreck and those kids inform him that he has a bone sticking out of his arm? That was pretty much my reaction after BJ Penn kicked the ever loving s–t out of Diego Sanchez’s skull. Much like the one kid said to the other, “Look at the f–king bone!” I was yelling “Look! You can see his f–king skull!” That gash was downright nasty, and in an interesting way served as a memento mori of sorts as it looked like the great opening from which all life bursts forth. You can actually watch the entire fight below en espanol. 1.)Licking Joe Stevenson’s blood off of his gloves

This isn’t just a violent BJ Penn moment; this is THE violent BJ Penn moment. It was quick, it was spontaneous, and oh my god was it glorious. After demolishing Joe Stevenson and making his face look pretty much like Big Boss’s in the E3 trailer for MGSV, BJ locked in the rear naked choke late in the second round to secure the victory by submission. Not only did BJ force Stevenson to concede victory, he straight up absorbed his life force after the fight by licking Stevenson’s blood off of his gloves. See, this is why pre-fight pyshicals and examinations exist. Seriously people. Bloodborne pathogens ain’t nothin’ to f–k with.

This Metamoris 4 trailer is so good we want to build a time machine to the future so we don't have to wait
Read Next Post →
Click here to cancel reply.