No more Deportes! Bellator is coming to NBC and Fox in April 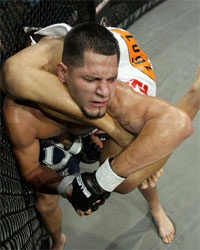 Before the Bellator Fighting Championships, humans had mysteries like ‘Who built the pyramids’, ‘What happens after we die?’ ‘Who shot JFK?’ ‘What the hell happened to my Corona that I ‘lost’ on my balcony last night’. Early in the summer of 2009, civilization pondered the question of ‘Why did the Bellator Fighting Championships only air on ESPN Deportes?’. It was the single greatest mystery we had left in this world.

Airing Bellator on ESPN Deportes was like making Philly Cheese Steaks the official food of Morocco. Its like issuing Swiss army knives to the Cambodian military. It was like eating Chinese food in Montana. To experience Bellator for every ounce of sheer rawesomeness that it was, you were forced to drop the extra $39.95 to nab the Spanish package from your satellite provider. We all love our telenovelas (not to mention Caliente or as I know it, ‘The only reason to wake up early on a Saturday for’) but if you wanted to witness Toby Imada’s groundbreaking upside-down reverse triangle choke, Yahir Reye’s spinning backfist KO, Nick Pace’s flying knee KO or the absolute slugest of Kerry Vera’s MMA debut then you had to shell out the extra loot.

Thank you Bellator for no longer Morocco Philly Cheesesteaking us. Bellator 2 begins April 8th 2010 and will air LIVE Thursday nights on Fox Sports. Now maybe the next time Jaco Clothing invites us to a Bellator fight, we will actually go instead of being held up in some Hollywood diner (true story). [Source]