The day will come when Nick Diaz writes an autobiography and it’s published without the assistance of a copy-editor. That would be more effective in communicating message(s) he’s trying to send to fans and opponents alike. It also prevents the meaning of his words getting lost in translation from the 209 to whatever dialect of English they speak wherever it is you’re from. The book will probably sit atop the New York Times Bestseller’s list beside Forrest Griffin’s fourth installment about how vampires will conquer zombies in a post-apocalyptic Canadian frontier, but it’ll probably end up giving that book the finger and continue advancing to the top of reading charts nationwide. This is not a plug to pre-order a book that has yet to be written because we’re fans of Nick Diaz, instead, we’re merely trying to point out that trying to edit Nick Diaz will get you nowhere, even if you’re the UFC. Not only does Nick see everything, he’s not shy about correcting people when they’re wrong; like he did in the comments of this UFC uploaded video clip on Youtube. Props to IronForgesIron for the find. 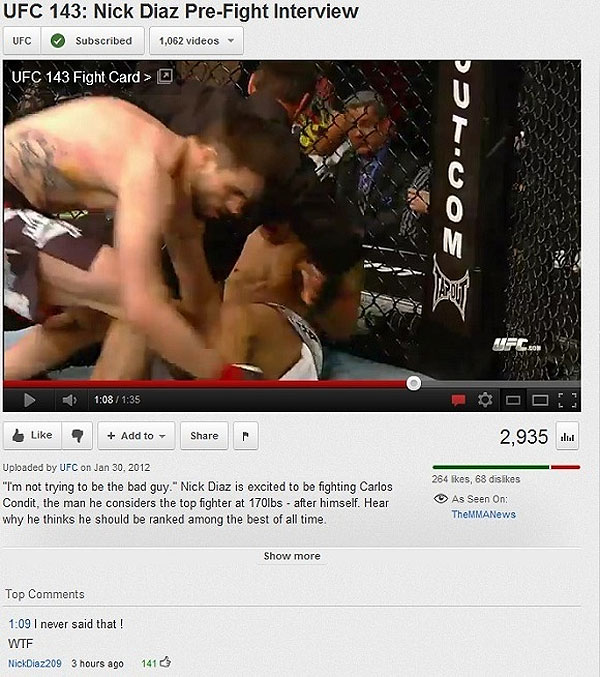 Here’s the UFC 143 promo Nick Diaz is referring to. Apparently it all goes down at the 1:09 mark.

Before you see them this weekend, check out the UFC 143 walkout shirts
Read Next Post →
Click here to cancel reply.