Posted on Last updated: September 7, 2009 By: Author Team ME

Props to Mousasi for making me roll around on the floor in laughter like a 3rd grader. So the Mousasi/Filho feud of funny has been going on for nearly a month now. A couple of weeks ago, Paulo Filho said he will beat Gegard Mousasi and if by some freak of nature he loses, dude doesnt he want to get paid for it. That’s pretty baller for someone that has the words ‘Reward Hunter‘ tatted on his body. It’s like he unlocked an Xbox achievement and was like ‘Dude, this one deserves to be on my body for the rest of my life as a reminder of how nice I am with the Xbox’. Paulo Filho also rocks flannel shirts with the sleeves cut off because he’s ahead of his time. If we ever nabbed an interview with Paulo Filho, we would have to coordinate our sleeveless flannels for journalistic consistency.

Gegard Mousasi finally removed his fist from Babalu’s skull after their Strikeforce bout and had this to say about Paulo Filho.

“What happened when [Filho] came to America, he wasn’t…he got beat up really bad. Now he’s back in Japan and he feels like a kid in a candy story, I think. He can use all kinds of steroids. And I think the steroids have gone to his head…[Filho] didn’t perform the same as he does in Japan as he does, how you say, in America. And now he suddenly has a big mouth again. I would say that he’s a little donkey that, he’s on steroids, he thinks he’s a running horse. But, he’s more like a little poney…I really believe that he used steroids. He also backed out a couple of times when he had to fight Chael Sonnen. He said he was crazy. Maybe he is crazy. I don’t know. I think he wasn’t feeling very good mentally because he cannot use his magic stuff…I also fight in Japan and I don’t use anything…If there’s an athletic commission test, he can fight me everywhere, everywhere he wants.”

Someone corner one of my functional alcoholic neighbor’s cats and sacrifice it to the MMA gods so we can get this fight going. It’s ok, she has about twelve of them and they all live off the leftovers in our garbage bin. ASPCA, you got to help…alternatively, NRA you guys have would have an abundant amount of target practice. First come, first serve. [Source] 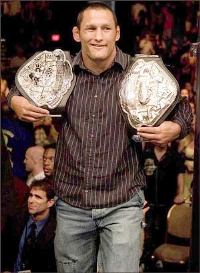