I’ve never met Bob Reilly, and I hope I never do. The only thing worse than that man is someone who comes to a bar to tell people why they shouldn’t drink. In either situation, a severe verbal ass kicking session is highly probable. When Bob Reilly isn’t wasting New York State’s money for his bi-weekly paycheck, he’s waging a war on allowing MMA to be legalized and overseen by the state. He’s also the most ignorant man to speak on the subject; namely regarding fighters’ safety and all the positive impacts MMA could bring to a state – who’s budget struggles to sustain its residents’ needs.

Luckily for New York, Dean Murray exists, and he has drafted a letter directly to the governor pleading to add the legalization of MMA to the agenda for deliberation over the next 30 days. 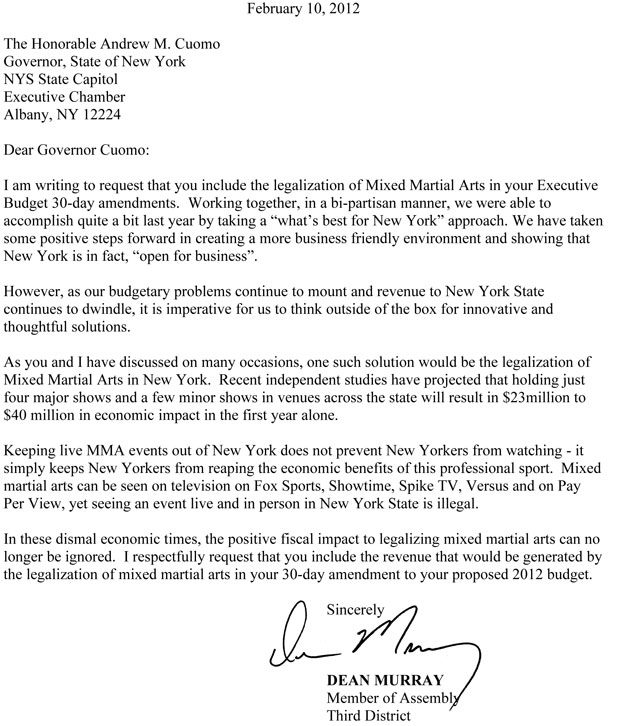 The likelihood of MMA being legalized this year is better than it was in the past 5 years combined, but Governor Andrew M. Cuomo has issued no official response to this letter as of receiving it 2 days ago. According to an undisclosed source, this is not the first letter of similar nature this month, and the dire financial reserves of New York State may force the state to consider legalizing MMA regardless of the minority number of opponents with moral reservations. If not, there’s always Muay Thai at Madison Square Garden in March that contradicts any argument of “brutality” that MMA brings to the table. Oh the ironing… [Source]