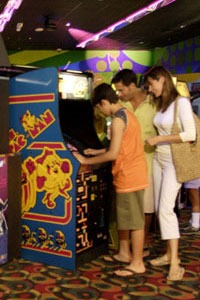 When I was looking for a picture for this story, I found this stock photo of a generic videogame arcade. On the left side of the picture is a chick playing one of those ‘Dance Dance Revolution’ games and the other side is a young boy playing a Ms. Pac-Man machine with his parents standing behind him. This picture was so unrealistic that I wanted it’s existence to be known to the rest of the world. I wanted to make sure that this photographer gets an ‘F’ for ‘Dude, that’s so friggin unrealistic’. I can’t imagine a scenario in which I would be forced to play Ms. Pac-Man at an arcade when I have Halo 3 sitting on my sofa. My sofa? Maybe I should move that before shards of a videogame gets lodged into an orifice I’d rather not mention. That would give a new meaning to a ‘Fuel Rod Cannon‘. Then again, maybe it won’t. Maybe I should just get on with this story.

A Mississippi arcade owner was arrested on charges of organizing an illegal underground MMA league confined entirely within his arcade. Just because this guy felt like organizing unsanctioned fighting matches wasn’t illegal enough, he has also been charged with possession steroids. Alright guy, relax. You can have the title of ‘The Mississippi Badass’. I’m sure Phil Baroni won’t mind. Here’s a snippet from the police report.

Officials said those participating in the fights range between 16-35 years of age and included both males and females.

In connection with his arrest, Doherty was booked into the Jones County Adult Detention Center.

According to police, Doherty had his initial court appearance in Laurel Municipal Court on Tuesday, where his bond was set at $10,000 for each charge.

Officials said the public has been helpful in this case.

“We had been getting a lot of calls concerning this activity,” Tolbert said. “People have informed us that some of their children were beat up or got a tooth knocked out. Parents were concerned about the activities at this place and notified us.”

My arcade was never this rowdy. Instead, we ran on a capitalist system in which paper tickets were the form of currency. For 60 tickets you can fill that insignificant void in your life with an oversized orange rubber dice, three plastic army men or a pack of really cheap playing cards. Damnit. Arcades are for republicans. [Source] 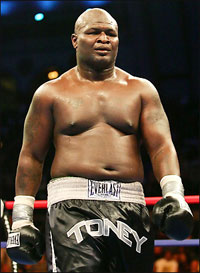 James Toney has just signed a multi-fight contract with the UFC
Read Next Post →
Click here to cancel reply.