Michael Chandler responds to Islam Makhachev calling him out, and reveals why he thinks Islam is pushing for this fight

After coming out victorious In his UFC Vegas 31 main event, Islam Makhachev called out a slew of people, including Michael Chandler. However the former Bellator champion seems to think there’s a reason for this call out.

Chandler made a massive impact when he came into the UFC, immediately being granted a title shot in the form of being a backup for Khabib vs Poirier. While he was not needed for that fight, he did end up getting a title shot after one victory, fighting for the vacant lightweight strap and coming up short against Charles Oliveira.

Since that fight he’s been looking for his next opponent, and has largely voiced interest in a fight with Justin Gaethje. Speaking in a recent Instagram live session, he explained that he thinks Islam called him out on his management’s orders, in order to stop Justin from having to take the fight.

“Gaethje should be next. There’s no doubt about it. There is no secret that he and Gaethje share the same management, so obviously that management would want to say ‘Hey, throw Islam on the Chandler trail so that it takes the heat off of Gaethje.’ But Justin Gaethje, come on bro. You call yourself a fighter, and you are, you’re one of the most exciting guys in mixed martial arts, be prepared to make a highlight or be a highlight, because that’s what I’m ready to do…

“I’ll tell you what, I’ve said Justin Gaethje’s name no less than 100 times since I’ve signed with the organization,” Chandler added. “He’s been asked to fight me three or four different times, every time he’s declined. He and I are ranked two spots away from each other.

“He has not fought since last October. He needs to get a fight in if he thinks he’s going to fight for the title. For some reason him and his camp have no interest in fighting me. So that’s the fight I want, that’s what I think it should be, two of the best guys fighting. It’s also a fight that I know the fans want to see, I know that’s a fight you guys want to see. So that’s my that’s my hope, that’s my thought, and I don’t really get why we haven’t heard anything yet.”

Michael Chandler had a ton of focus on a crucial lightweight rubber match between Dustin Poirier and Conor McGregor. Unfortunately things did not go as expected, with the Irishman breaking his leg at the end of the first round.

Michael says that he wishes that the fight had been able to continue, at least to see who the rightful winner would have been. In fact, he made a very convincing case as to why Conor should not have been counted out, just because he lost the first round convincingly.

“It’s a hard one, because a lot of people say Dustin was just going to run through him. I don’t know if Dustin necessarily runs through him. Chad Mendes ran through Conor, and then Chad Mendes lost that fight. Conor is better than we think he is a lot of times, at dealing with the early onslaught, the early adversity, the early takedown, and the early wrestling and grappling,” Chandler said.

“I think Poirier wins that fight, I think Poirier would have won that fight, but I don’t think you can necessarily say ‘Hey because the first round he would have smashed him…’ Imagine if Charles Oliveira would have broke his hand, broke his elbow, broke his leg, broke his foot, at the end of that first round (against me)… We could have easily said ‘Oh well Chandler was about to run through him. Chandler would have done what he did in the first round, for two, three, four, and five. He would’ve ran through him, would’ve knocked him out.’ And what happened? I got caught in the second round, Charles Oliveira is your lightweight champion.”

This is a pretty interesting analysis from Michael Chandler, and one that is not completely flattering for himself. It will be interesting to see who he returns to action against, and if he can get the Justin Gaethje fight he is after. 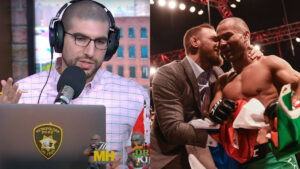 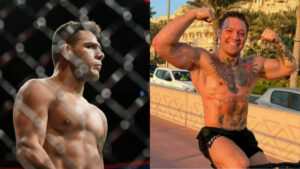