The UFC’s first 5 round non-title fight just went down but as expected, the extra two rounds were as superfluous as a price sticker in a 99¢ Only store. Of course a fight between guys nicknamed ‘The Crippler’ and ‘The Filipino Wrecking Machine’ wasn’t ever going to a decision. You have all just witnessed the answer to the future trivia question “who won the first ever 5 round non-title fight in the UFC?”. Another piece of trivia for you, the first time Muñoz ever sparred, it was with Randy Couture. If Hasbro want a researcher for MMA Trivial Pursuit, I hope they are reading this.

A surprisingly slow feeling out process saw Munoz mirroring Leben’s footwork which worked well as he scored a takedown within the first minute. Leben struggled back to his feet after a failed guillotine attempt from Munoz, using the fence well to work dirty boxing. Leben surprised everyone in the crowd by taking Munoz down with a trip but the wrestler bounced back up. Unbelievably, Leben took Munoz down again, but Munoz reversed, stood up and started teeing off. Leben’s notoriously tough head saved him and he managed to get back up again.

Round two started a lot faster. Leben backed Munoz up with slow motion Belfort style running punches. However, Munoz worked this to his advantage, taking Leben down and working ground and pound. Leben worked brilliantly to get up but to no avail as it is now pretty clear that Munoz wants this fight to play out on the ground. Some nasty punches and elbows opened Leben up and his left eye looked like a trodden on hamburger. The doctor was quite happy to let Leben carry on, to great applause from the crowd. Even on the ground, Munoz throws punches like he’s smashing plates at a Greek wedding. The second round ended with Munoz on top, pushing a tired but still game Leben into the cage.

Still, no matter how game Leben was to continue fighting, his corner called an end to the fight between rounds, presumably to save Chris Leben’s eyesight since we’re still a few years away from bionic eyes. Post-fight, Munoz calls for a title shot amid deafening boos from the crowd. I don’t know about you but I’d pay for a Mark Munoz vs Anderson Silva headlined PPV any day. 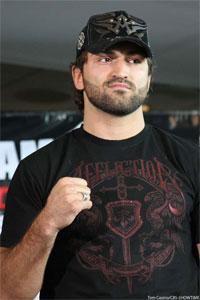