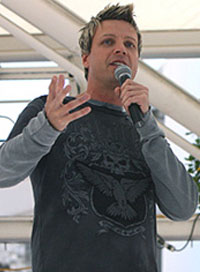 Fedor. You know Fedor, the same guy that made you cry in bed at night when you were a child. The same dude that uses cinder blocks and roman spears as eating utensils. We all know the the dream match up between Fedor vs. Brock and we all know that it will never happen. Well Jerry Millen from M-1 Global told MMAJunkie Radio that not only could the fight happen whenever Brock wants…but Fedor will do it for free.

“If these guys in the UFC truly wanted to fight Fedor, they’d find a way. Come to his training camp. Come to Stary Oskol, and we’ll do three, five-minute rounds in the ring or the cage. We’ll do it for fun.”

I’m not sure why anyone would choose a guy that goes by the nickname of ‘The most dangerous man on the planet’ to fight. Usually, my life has consisted of avoiding any scenario that forces me to get in a cage with Fedor. You know how when a hurricane hits a town and a guy gets on camera and says ‘We could have been dead…or worse’. That ‘or worse’ is fighting Fedor Emelianenko. [Source]

Rampage is using a white guy in black face to do his stunts for The A-Team
Read Next Post →
Click here to cancel reply.