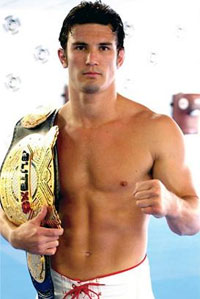 The probability of myself interviewing KJ Noons is directly influenced by the vicinity of KJ Noons’ father. Aside from attacking Nick Diaz in Hawaii and choking me at a downtown LA club, Papa Noons is a pretty chill guy…when he’s not trying to beat you up. In the Strikeforce Houston conference call, Papa Noons temporarily stopped partying like a rockstar to let his son express how he truly feels about UFC.

“I am especially really excited about my opponent and when you put our two styles in the ring you are really going to have a lot of fireworks. In my eyes, Jorge is the No. 1 contender so this a top fight for me. By no means am I acting like I have this one in the bag. I am training as hard as I can. This is probably one of the most dangerous opponents I have had…. Jorge comes out and puts on great shows, but if you want to watch jiu-jitsu, go to a tournament. This is fighting. If you want to see some lame fighting go watch the UFC, go watch something boring as hell. If you want to see something exciting, come Aug. 21 and see a guy who’s been boxing his whole life, and someone who has a black belt in jiu-jitsu. This is what people want to see…. I don’t have to say it very much but look at his track record: He has the fight of the night, and look at my track record (and I) always (have) fight of the night. Put us in the cage and you are going to get fireworks. I have respect for the main event but we are probably going to steal the show”

Wrong KJ. If you want to see some lame fighting, watch two guys in West Hollywood fight over a Target shopping cart. It happens right around 4pm in the ‘linen and bedding’ aisle. It’s embarrassing and will force you to look the other way in sheer disbelief, sort of like watching an episode of ‘America’s Got Talent‘. [Source]