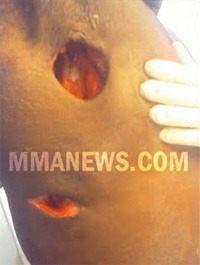 It’s happening again. If you’re still cleaning up the vomit from your desk, that image is a picture of Kevin Randleman’s staph infection. Yeah, it’s no joke. Now you know why fighters are out for months when their camp says they’ve been infected. Clean your mats, clean your hands and most importantly…don’t end up like Kevin Randleman in 2007. That’s a hole through his armpit folks.

Apparently Kevin Randleman refused to learn from his mistakes and it looks like his bout with Roger Gracie that was supposed to go down at Strikeforce Heavy Artillery is in jeopardy due to Kevin Randleman contracting staph infection. Loretta Hunt of Sherdog just spoke with Kevin Randleman and here’s what he had to say in regards to another hole emerging from his friggin torso.

Randleman also said that if he’s forced to pull out of his bout with Roger Gracie, he will consider retirement. Every time I see that Randleman picture, I can’t help but stare in awe. It must be similar to what Robocop felt when he laid his eyes on ED-209 for the first time. Robocop references work well with staph infections, try it out for yourself. [Source]