Karolina Kowalkiewicz Needs Titanium Plate For Broken Face, May Have To Retire

Karolina Kowalkiewicz took quite a beating in her most recent contest. Now it seems possible that she will be unable to fight again, following a need for surgery.

Kowalkiewicz faced Xianon Yan last month, at UFC Auckland. She was beat pillar to post, en route to a unanimous decision loss. However what concerned fans was the massive amount of damage she took during the fight.

The bout was somewhat controversial, due to some questionable officiating on the cageside doctor’s part. In between the first and second rounds, the doctor came to look at Karolina’s eye, as she had noticably been struggling to see after taking a shot to the face. Despite the fact the doctor allowed the bout to continue, she struggled seeing for the rest of the fight, with the damage only compounding.

Now it seems the decision for Karolina Kowalkiewicz to keep fighting is having some serious repercussions. She recently took to her Instagram Stories to answer questions about her health. Here, she revealed that she would be undergoing surgery on Thursday, to get a titanium plate in her face. Moreover, this has left concerns that she may not be able to compete anymore.

“I hope it wasn’t my last fight but now I’m focused on my health,” she said in her story. 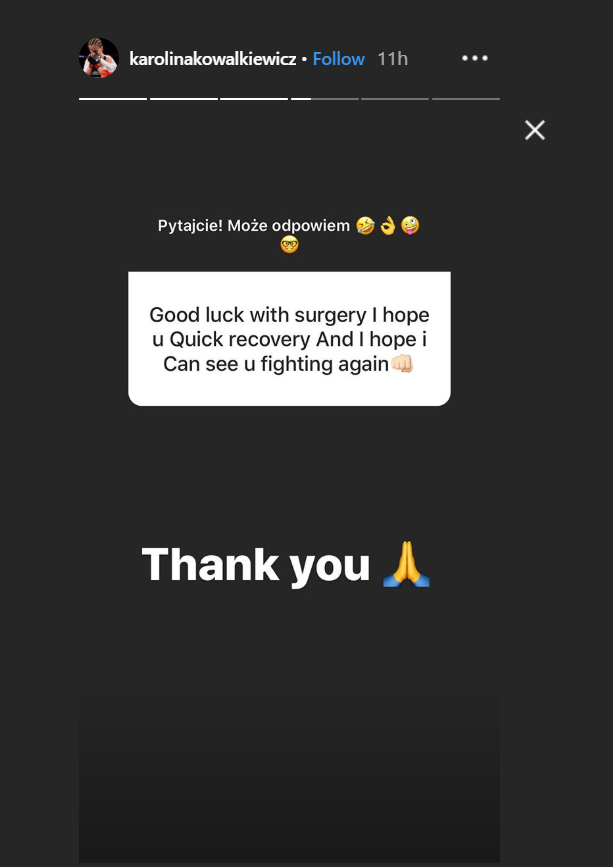 If this truly was the last time Karolina Kowalkiewicz is able to fight, it is a massive shame. While there is no point in focusing on what should have happened, it is hard to not feel like the doctor or someone in her corner should have stopped the fight earlier. Regardless, MiddleEasy wishes her a successful surgery, and speedy recovery.