Josh Koscheck willing to bet $100,000 that he will beat Tito Ortiz 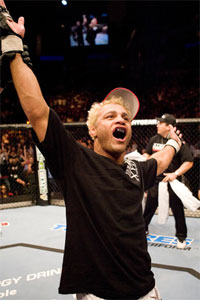 Jesus saves because Jesus is a hoarder. He needs to learn how to have a garage sale. Alright, a lot of people probably didn’t get that. That’s probably not the right way to start off a Wednesday morning. I’m not sure if there’s a right way, but that’s definitely the wrong way. Josh Koscheck started off his morning by giving percentages of the people on The UG that think he will beat Tito Ortiz and then throwing down $100,000 that he will defeat him just after he’s finished with Semtex.

Hey @titoortiz so do you think you would take the fight?? About 90% of the people on MMA.tv think I would get you!!!

2 little? Look at the old days of the UFC. I would bet 100k of my own money on it.After I fu*k this Brit up,I want to kick big mouths ass.

Look, don’t even pay attention to the fact that Koscheck is two weight classes under Ortiz. That’s using way too much logic. Just imagine that we live in a world filled with Superfights, Catchweight bouts and Freakshows. Regardless, it would be well worth dropping $59.95 on. Props to MattK for the tip. [Source]

Mark Coleman has been released from the UFC

Jake Paul My Boxing Skillset is Better than Conor McGregor, Masvidal, and Askren