Ever since featherweight legend Jose Aldo claimed he would fight at 135lbs, fans have been skeptical. As time progressed, images of Jose began to emerge where he looked extremely frail. In fact, many fans thought that Aldo had already hit the bantamweight mark of 135lbs, but, Jose was actually not even close to the weight class. Now that the fight is less than two weeks away, Aldo still looks drained as ever, and it’s quite frightening.

UFC reporter Aaron Bronsteter, of TSN Sports, recently posted some images of Aldo to his Twitter account. Included in the four images, was one of Aldo with his shirt off, posing with his training partners.

The internet had a field day once the images were released. Fans in the comment section were ruthless with their comments, memes, and quote tweets. The majority of fans believe that Jose looks extremely ill in his new weight class.

he doesn't look too good

Despite all of the jokes made about Aldo’s cut, everyone still wished him to be healthy. Which, is a good sign for both Aldo and humanity. Hopefully, Jose doesn’t have any issues hitting the mark when it comes time to weigh in for UFC 245.

Aldo has admitted his struggles with making the weight cut to featherweight in the past. Which is why it is so shocking that he decided to make the move down to bantamweight. However, Jose has always been a professional and never missed weight in his 33 fight career.

At UFC 245, Jose will take on fellow Brazillian bantamweight Marlon Moraes. Throughout Jose’s entire MMA career, he has never fought at 135lbs. However, there have been times where he fought at 155lbs, which truly is an indicator of just how much weight he has to shed.

Aldo’s diet in hopes to make the bantamweight division also made fans turn their heads. Hopefully, the weight cut works out in Aldo’s favor and he is able to display his talent inside of the cage. 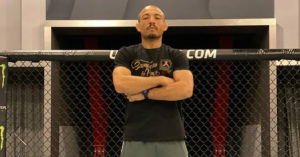