Soccer is serious business in Brazil and not something to be played with or make jokes about. Not even Chael Sonnen, who might be the most hated person in Brazil has dared to make light of soccer team rivalries. Maybe when Chad Mendes tweeted a picture of himself wearing Jose Aldo’s rival team jersey he didn’t realize that joking about soccer is like Ray Liotta telling Joe Pesci he’s a ‘funny guy’ in the movie Goodfellas. Jose Aldo is letting him know now though. The picture Chad Mendes recently posted is of himself smiling and wearing a Vasco soccer jersey, Vasco is Aldo’s Flamengo team rival. The rivalry between the two teams is fierce and according to an interview with Esporte Aldo says Mendes has no idea what he is geting himself into:

“He did it just to spice up the fight. He doesn’t understand this rivalry of Vasco and Flamengo. There will be a classic, it will be Brazil against the United States. The crowd will be with me Vasco and Flamengo will be still more against him.”

“I’m doing everything right in the gym and will not go wrong, “said the champion. “I’ve got the same style fighters with him and won. The business now is to train, get out there and bust. “ 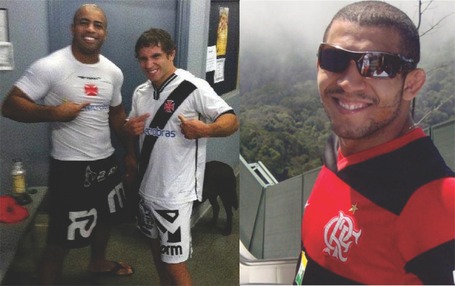