Jon Jones took to social media to reflect upon the six year anniversary of the first fight between he and Daniel Cormier, denying their rivalry.

It’s been six years since the first legendary fight between UFC rivals Jon Jones and Daniel Cormier. However, in the eyes of Jon, the pair aren’t rivals at all. Jones took to social media in a string of since-deleted tweets and discussed his thoughts on their rivalry.

Although Daniel Cormier retired from competing in the UFC octagon, his feud with Jon Jones will be forever. Both men take jabs at each other whenever they can. Whether on social media or TV, it’s clear that Jones and DC will never be friends. On DC & Helwani, Cormier recently spoke about the recent back and forth with Jones on Twitter.

Jones took to social media to reflect on his beef with DC. In a series of tweets, Jon made sure to notify the public that DC isn’t his rival. But, that Cormier is beneath him. The tweets were then deleted. However, the good people at BJ Penn were able to capture a screenshot of the tweets. 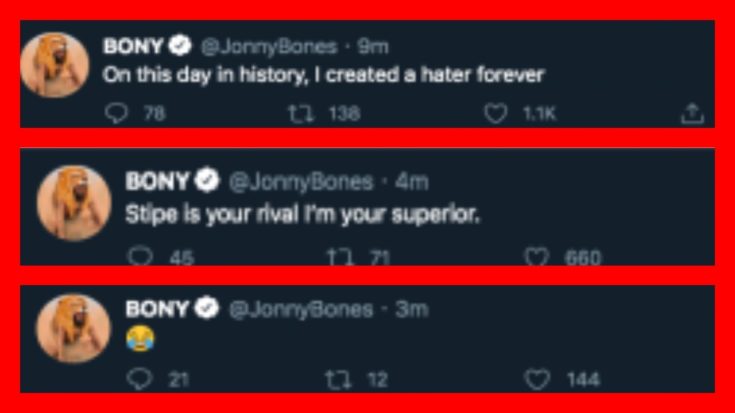 “On this day in history, I created a hater forever,” wrote Jones on Twitter.

“Stipe is your rival. I’m your superior.”

Jones first defeated Cormier at UFC 182. However, Jon was stripped of his UFC Light Heavyweight title due to violating the UFC’s Athlete Code of Conduct policy. Next, Jones faced DC for a second time at UFC 214. This time, Jones was able to finish Cormier via head kick knockout. However, once again, Jones violated the USADA protocol and failed a drug test, thus relinquishing his win.

Cormier is long gone from competing inside of the octagon. However, it looks like the beef between him and Jones will never die. Like DC said, if he ever runs into Jon in public, chances are the pair will argue. Regardless of their personal encounters, both men will be eager to document the experience on social media.