Despite Jones being one of the most talented fighters ever, Cormier feels he cannot be part of the GOAT debate due to his repeated failed drug tests. 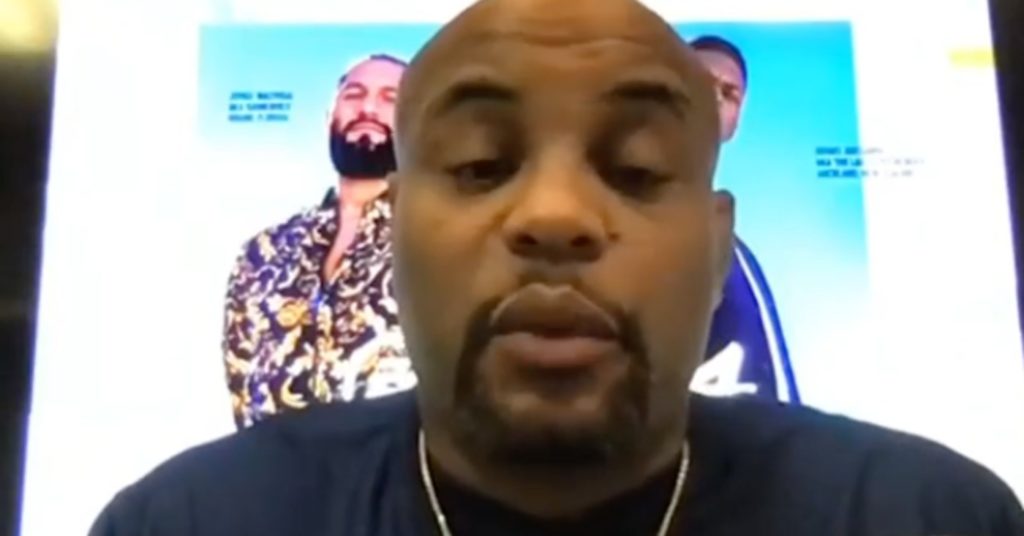 Jon Jones cannot be part of the GOAT conversation because of his failed drug tests according to Daniel Cormier.

The GOAT debate has been rampant ever since Khabib Nurmagomedov’s retirement from mixed martial arts last month at UFC 254. Although some believe “The Eagle” is the pound-for-pound best fighter in the sport today, many others believe Jones is still the greatest of all time given his overall body of work and longevity.

While Cormier does acknowledge his old rival as one of the most talented fighters, he believes his failed drug tests automatically remove him from the conversation.

“One of the most talented guys you’ll ever meet but again for me bad [drug] tests eliminate you from the conversation,” Cormier told MMA Fighting. “I just cannot understand how that is so hard to comprehend in a sport where we’re fighting each other. In baseball, bad tests eliminate you from being considered and being in the Hall of Fame and you’re hitting a ball. You’re hitting an object that has no feeling. In fighting, you’re punching people, human beings, and you have bad tests that eliminates you. It’s just too dangerous.

“So I think when you start to think about the greatest of all time for all the things and all the great victories, you can’t look at those, me personally being a guy that those fights did really long term damage to my career, it’s hard for me to say [Jon Jones] is the greatest of all time when every time we fought, there was some sort of issue. That for me, it just kind of changes the conversation.”

Jones, Silva Out Of The Debate For Cormier

“Bones” notably tested positive for clomiphene and letrozole which saw him pull out of his UFC 200 fight with Cormier in 2016. He would then test positive for turinabol a year later following his now-overturned knockout win over Cormier at UFC 214.

And by Cormier’s logic, even Anderson Silva is out of the conversation.

“Jones was having bad tests while we had USADA and people still want to place him at the top of the all time greatest list. That’s crazy. It wasn’t even illegal in baseball in the late 90’s and those guys are hitting home runs freaking 50 yards longer than they ever have. It’s just a different sport obviously, but it just seems like the possibilities of damage are just so much more severe in mixed martial arts. For anyone, even Anderson [Silva]. Anderson was the man. Bad tests, I don’t care if it’s for viagra, it does not matter. It’s a bad test. Bad tests in a combat sport where you’re punching people, just not right. It eliminates you.”

Ultimately, it’s a shame according to Cormier as he believes the likes of Jones and Silva never needed to resort to performance-enhancing drugs in the first place given the amount of talent that they possessed.

In comparison to them, the likes of Nurmagomedov and Demetrious Johnson have never tested positive and should be in the conversation instead.

“It sucks, too, cause they’re so immensely talented,” Cormier added. “So talented that I don’t think any of those guys ever needed to do anything wrong and would have been clean. Like Khabib’s clean. Nobody has heard or suggested or thought that he’s done anything negatively outside of missing weight when he was on his way up. Those are the things that he is going to have to deal with in terms of negatively. Demetrious Johnson is actually completely clean. No missed weights, no failed tests, he’s just clean.

“Those are the types of guys you look at and say ‘that guy’s the greatest fighter of all-time.’”

It wouldn’t be a surprise if Jones caught wind of these comments and responded on social media in a not-so-cordial manner.