Is GSP’s body looking bigger/better to anyone else?

[-] earl_grey_tea_bad – Hey guys so I found these photos on TMZ, stole them, and placed them on r/MMA and if anyone takes these photos and post them on their site then we’re going to boycott their site and tell them how they’re ruining MMA. So look at these photos of Georges St. Pierre is his body looking bigger to anyone else? Hot or not? A/S/L, too. 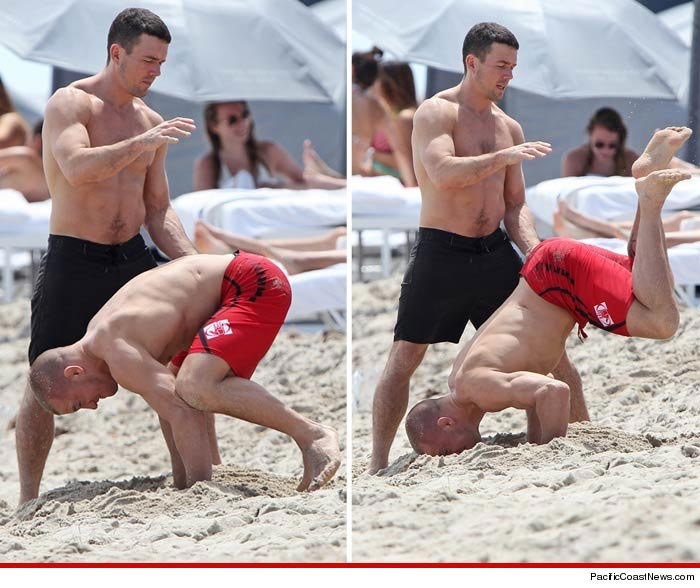 [-] Flakka62 – He’s looking thicker than usual, which is good. Look at the bulk surrounding his left calf muscle.

[-] thexforce – Meaty for sure. His body is finally filling out and you can tell from the circumference of his head that his carbohydrate intake has increased by at least 20%.

[-] eraserfoot – The last time we saw GSP’s head this big was when he fought BJ Penn the first time and everyone accused him of greasing. If you look at the second picture you can see the grease dripping off his nipples. Seriously you guys, look at that. Greasy nipples.

[-] you_are_a_lunatic – Dude you can’t even see St. Pierre’s nipples in that second photo. I looked a while and even zoomed in. No GSP nipple. Sorry.

[-] BabyJesusSenior – He’s right, no GSP nipple to be seen in that photo, and I’ve seen enough GSP nipples to know what a GSP nipple looks like.

[-] Gummo115 – Pretty sure eraserfoot is talking about the guy training GSP. He’s pretty thick himself, probably could fight at 170 if he cut weight, maybe even lightweight if he cut some of the shoulder and neck fat the he has. He’s pretty chunky around the shoulders.

[-] FreemanJill – That’s what happens when you duck Johny Hendricks and start doing the Hollywood thing and make movies instead of fighting. Georges is probably pushing 200 lbs right now, way overweight right now. It’s actually embarrassing to even look at these photos. It’s sad to see his body decline like this, I really wish he would stop partying and just focus on getting back in the cage. By the end of the summer he’ll probably be in rehab for Cinnabons.

[-] Plashisk – Fat for sure, but only around his mid section. Sort of looks like a fatter version of Jerome Le Banner. His ACL injury must have pushed some of the fat up his torso. I’ve seen it happen before. Medical condition.