In 3 days, Kid Yamamoto opens up the greatest steakhouse in the history of steakhouses 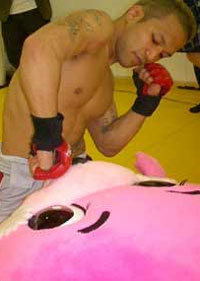 Kid Yamamoto is like a demigod in Japan. I’m not even fully sure what demigod means, but I heard it True Blood so I’m assuming it means rawesome (or ‘topless’ in Vampire). If you were amped up on 5 hour energy shots and cans of Redbull like us at 4am in the morning on May 26th 2009, then you witnessed quite possibly the greatest upset in MMA history. Joe Warren, a guy from Portland with a record of 1-0, defeated one of the biggest names in MMA serving Yamamoto his first loss in seven years. A few months after his loss, Kid Yamamoto issued a press release announcing that he has split with his really, really hot wife and that it was all his fault (dude must be related to me). In the press release, he admits that ‘hanging out with his friends’ was one cause of the divorce. Kid Yamamoto also stated that he played with his kids too much and was unable to properly educate them. Basically, Kid Yamamoto sounds like every friggin guy that’s reading this. Hot chick gets pissed off at a dude for being a dude. It’s like the plot of a movie that would star Jude Law.

Kid tried to bounce back from his Joe Warren loss by taking on Kanehara at Dynamite!! 2009. After three rounds of essentially defending himself, Yamamoto racked up his third career loss. Bummer. Kid did what every fighter does after losing two fights in a row, opens up a steak house.

‘Beef Terminal Kid‘ opens up 5:00pm on March 5th in Nagoya, Japan and is currently a contender for the best logo of 2010. Kid is looking for franchisees so if you feel like owning a store with a name that sounds like the 10th member of Wu-Tang Clan, call 052-971-1010 and good luck speaking Japanese. Check out Beef Terminal Kid’s official site for more Yamamoto goodness. [Source] 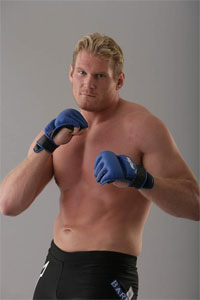 Josh Barnett signs with Dream, expected to fight at Dream 13
← Read Last Post
Only Overeem would turn a pillow fight on a yacht into an MMA brawl
Read Next Post →
Click here to cancel reply.