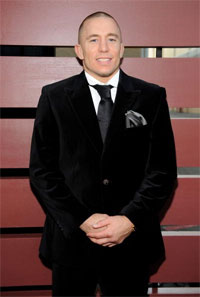 I had a dream that I murdered someone on Friday. I don’t know what Friday it was, but in my dream some guy hired me to kill his student. In return, I received a recommendation letter, which makes me think I really need to get my alibi straight if something like this went down. Of course, this also makes me think that if I did kill someone, the last thing I would do is post my experience on a heavily trafficked MMA website.

I’ve never met Georges St. Pierre, but I can only assume that he knows the words to at least one Wu-Tang Clan song. In fact, that should be a prerequisite for everyone. It will teach you important aspects of our universe like the exact distance from the sun to the earth, the hierarchy of the Indian caste system and how to cut angles and change levels when you exchange fists — all of which can be found in the Wu-Tang Forever album.

In an interview with Fighters Only Magazine, Georges St. Pierre says that Dan Hardy is still one of the best, but he just made a split-second mistake in his KO loss against Carlos Condit at UFC 120.

“I think Hardy made a mistake. He wanted to swing too hard, to make the crowd happy, you know? He came in very wild. When you stay in the middle and exchange, it’s like flipping a coin”

“It’s risky to exchange in the middle like this – you need to cut angles and change levels. It’s about hitting and not getting hit.”

“I think Hardy’s still one of the best, it was just a mistake. Half a second’s difference and the result would have been the other way around”

Props to George St. Pierre for rocking a black velvet suit in that picture, something only previously reserved for Bishop Magic Don Juan. [Source]