Burns says he is in negotiations to fight Chimaev in April.

It looks like we may have finally found a foe for Khamzat Chimaev.

Welterweight contender Gilbert Burns has agreed to fight the highly-touted UFC star. Burns and Chimaev would see eye to eye on a date: April 9th. Chimaev would screenshot his messages with Burns, teasing the match-up.

Chimaev would reply to Burns’ story, featuring a story about him. ‘Borz’ would send emojis of interest to Burns. Burns would respond, popping the question, ‘April 9’. Chimaev would answer back with: ‘Yes brother let’s go’. 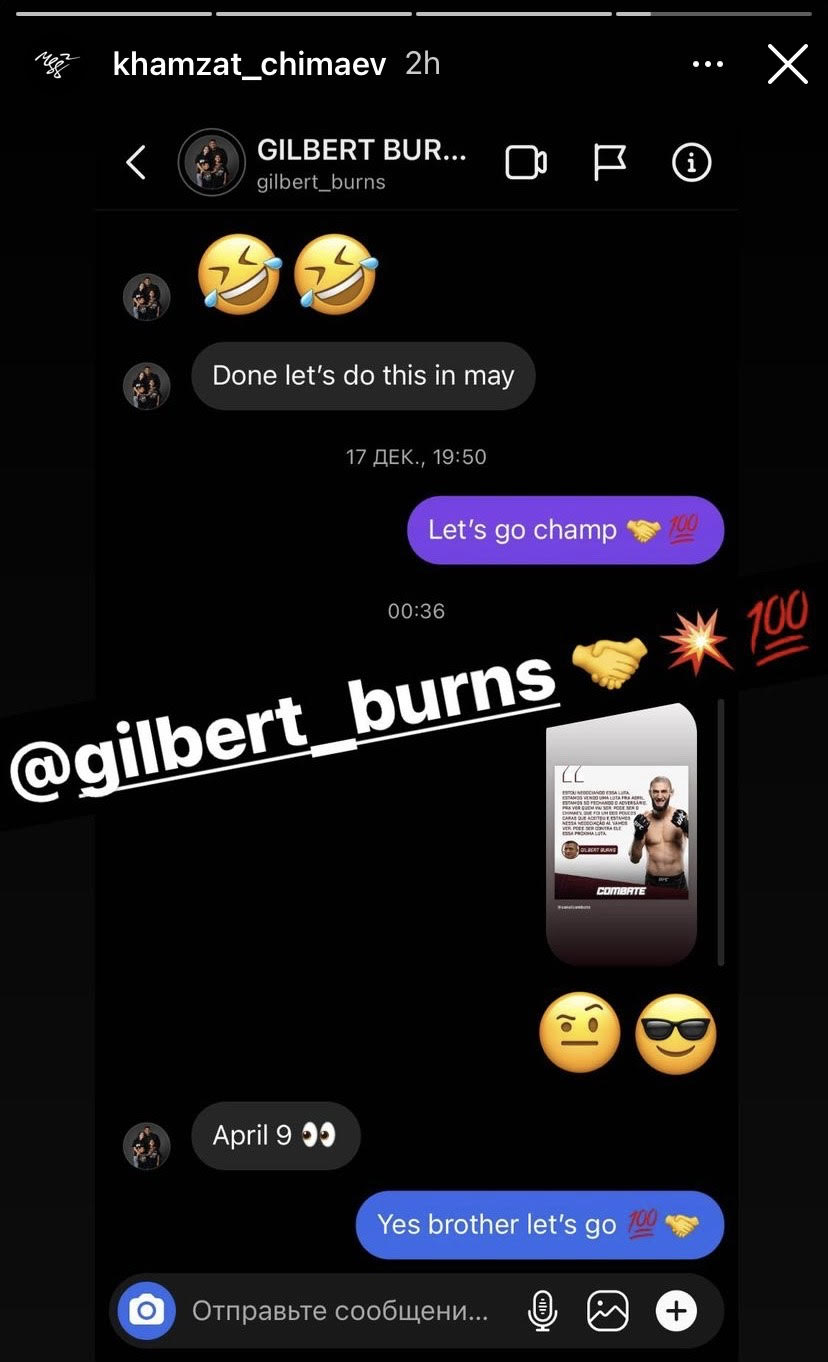 Nothing is official as of yet, but fight news will be arriving soon, Burns said on Instagram. Whether or not that will be against Chimaev, hasn’t been confirmed yet. However, it looks like Chimaev is a name that’s being tossed around in his negotiations.

‘Durinho’ would discuss the details of his return to the Octagon in a recent interview.

“We’re negotiating this next fight.” Burns told Combate. “We’re looking at a fight in April. We’re still looking at who the opponent could be.

“It could be [Khamzat] Chimaev, who was one of the few guys who accepted and we are in this negotiation there. We’ll see. It could very well be him in this next fight.”

If this fight comes into fruition, it will the biggest of Chimaev’s career so far. ‘Borz’ last beat the brakes off of Li Jingliang at UFC 267. The fighter would extend his record to a perfect 10-0 with a fast finish in his return.

It has been quite some trouble in booking Chimaev. UFC President Dana White has made his complications finding a fight for him public, saying ‘nobody wants to fight this guy’. It appears Gilbert Burns may be the one to disprove that claim.

Burns is coming off a unanimous decision victory against Stephen ‘Wonderboy’ Thompson at UFC 264. He would challenge his former teammate Kamaru Usman for the welterweight title, but would be knocked out in round 3.

‘Durinho’ looks to get back into title contention with a win whether it be the massively-hyped Chimaev or somebody else.

Paddy Pimblett On Dustin Poirier: If Charles Oliveira Can Do That To You, 'Then F*cking I Can'
← Read Last Post