Out of all the possible nicknames that can be assembled with a last name of ‘Beerbohm’, Lyle decided to go with the moniker ‘Fancy Pants’ as an attempt to make your brain explode out of sheer confusion. Actually, Lyle’s mom has been cranking out his fight shorts for the past four years and she’s the official holder of the ‘Fancy Pants’ fabric. You can’t find this stuff in any fabric store, trust me, I’ve tried. Besides, if people got their hands on it, then everyone would have a flawless 15-0 record in MMA. Tonight, Lyle Beerbohm is going for his sixteenth consecutive win which, Beerbohm hopes, will lead to a shot at the Strikeforce lightweight title. Jason Nawara had the audacity to interrupt Beerbohm as he was eating dinner with his family to obtain a pre-fight interview with Fancy Pants, and I’m thankful for it. So was Lyle.

So do people always call you Fancy Pants or is it ‘Fancy’ and then ‘Pants’?.Everybody calls me something different, some people call me ‘Fancy’, some people call me ‘Beerbong’ — so I go by a lot of different names, for sure.
Josh Thomson insisted that you ‘ducked him’, but didn’t you see him on the elevator yesterday? What’s going on with that?Ah, he’s in my weight class so we’re going to fight someday, but I’m definitely not ducking him. We pretty much squashed whatever beef we had.
Tell us about your documentary, how’s that going?It’s going really good. The documentary is called ‘No Submission’ and the website is NoSubmissionFilm.com. It should be coming out this coming summer. We’re just doing editing and a little bit of filming. I really get into the nitty-gritty on some of the stories, I don’t hold back. When I was high on meth, I tell people what I had to do to get high and I hold nothing back.
If someone told you that you would be headlining a card on Showtime and your name would be ‘Fancy Pants’, what would you say to them?.I wouldn’t believe them, that’s for sure. It’s amazing where I used to come from and where I’m at now. I’m sitting at a table with ten of my family members and it couldn’t be better. At one point in my life my brothers, sisters and the rest of my family members didn’t want nothing to do with me.
Can you talk about the book your dad is writing?My dad and a guy named Zack Robinson is writing a book about me, Zac Robinson wrote Stich’s book from the UFC and it’s going along really good too.
Training with Cody McKenzie and Mike Hanks, when your fighting career is over is there any chance you guys can start some New Wave band?Haha, Cody is definitely a character, for sure — and so am I. They’ve been there since day one for me. We don’t have coaches at our gyms, we don’t have jiu-jitsu coaches or wrestling coaches, stand-up coaches. When I first came in I had Mike Hanks and  Cody McKenzie and we got it on. We sparred everyday. They didn’t like it, but I pushed them and now when they’re training guys, they make them spar. It was a good thing. Cody has good jiu-jitsu, I learned how to stay out of subs. Hanks has good jiu-jitsu and good hands. We’ve really evolved each other. If I didn’t have them as my training partners, who knows where I would be. I owe a lot of credit to those guys.
When things were getting rough for you with Strikeforce and the lack of fights, did you think that you would go down the ‘Ultimate Fighter’ route like Cody did?I had a contract with EliteXC and when EliteXC went out of business, Strikeforce ended up with my contract so I was never able to do anything at all — I’m with Strikeforce and Strikeforce is my home, so I will never be able to do anything like that.
Does Cody throw the guillotine a lot in training?Oh yeah, oh yeah. Cody is always choking people out in training. Everyday.
Have you been watching the Strikeforce Heavyweight Grand-Prix?I did, I watched the first round. I thought Bigfoot did good and I think Fedor is getting too small, he’s too small for the division. If he cut down to 205 I think he would do good, but he doesn’t want to do that.
So after cutting down to 155lbs, what are you going to balloon up to tonight?To tell you the truth, if need be, I can make 145. Strikeforce doesn’t have that division. If I had enough time, I could cut down to 145, but I’ll be around 168 [during the fight].
Do you think Strikeforce should take a more active role in signing these Sengoku guys that are being let go?I don’t know, but I know who I need to fight — Gilbert Melendez. He has the belt. In my opinion, he’s the best lightweight in the world. I truly believe that. I want to put myself against the best competition, and I think Strikeforce has it.
If you beat Pat Healy, do you think you’re in line for the top three in Strikeforce? Where do you rank with them right now?If I beat Healy, I’ll be 16-0, 4-0 in their division and I think I should get a title shot.
You said that when you got out of prison that’s the moment you knew you wanted to do MMA. Clear this up for me, you learned about MMA in prison and that’s when you trained for it?I was sitting in prison watching The Ultimate Fighter and I just knew I could beat those guys. So deep down inside I said ‘those guys are on TV and making money, I could do that’. So I got out of prison, my mom and dad got me a year later and while we’re driving, we drove next to an MMA gym and I said ‘dad, you got to pull over’. I actually threw on a gi and started grappling that night and eight days later I had my first cage fight — and four years later, I’m talking to you. I’m 26-0, 10-0 as an amateur and 16-0 as a pro.
Do you have an addictive personality?Sure, I do.
What was the day when you realized that you needed to turn your life around?When I saw TUF, it made me think that I could do something else. If I didn’t have MMA at that point, I could have been back on drugs that night. If I didn’t have something to channel all my efforts in, I would have channeled it back into meth. I truly believe that. So I was able to channel all my energy into MMA and that really helped me out.
For more MMA News, Rumors and Updates follow the Red Monster on Facebook, Twitter, YouTube and Instagram
FacebookTwitterFlipboardRedditWhatsAppPinterestLinkedIn 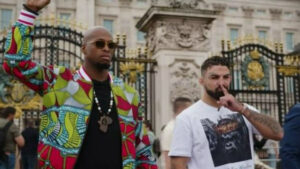 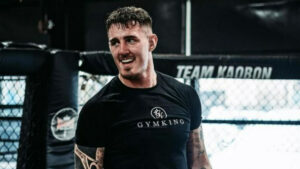 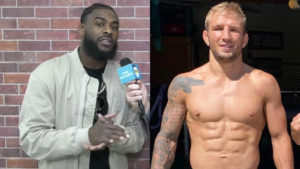 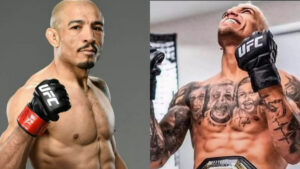 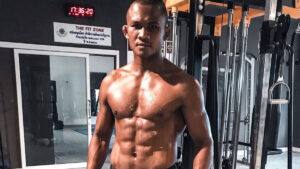