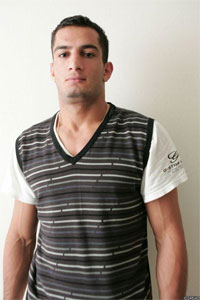 Gegard Mousasi is like the hottest thing right now. That’s a pretty ignorant way to start off a story but when it comes to a 6’1″ tall Armenian dude that has the power of the entire Fantastic Four wrapped up in his fists…you’re pretty much forced to preface everything with ‘the hottest thing’. If this story were about Kim Kardashian, it would have the same introduction. Kim Kardashian is also Armenian but unlike Mousasi, her superpowers do not lie within her fists. Instead, her superpowers have been concentrated entirely in her ass. If asses were the evolutionary line of mankind, her ass would be the first fish that decided to walk on land. Kim Kardashian’s ass has thoroughly revolutionized the world and it’s safe to say every guy is grateful for her parents having unprotected sex 29 years ago. Oh, yeah…Gegard Mousasi is making his professional boxing debut on January 9th just 8 days after his scheduled to fight with Gary Goodridge at Dynamite!! 2009.

Mousasi will be making his debut against some guy named ‘TBA’, who’s from a place called ‘N/A’. He will be fighting as a heavyweight and it will take place at the Civic Auditorium in Glendale, California. If you’re in the area, stop by and say what’s up to The Dreamcatcher. Also tell him that you are willing to give him a new nickname absolutely free.[Source]