Fedor has a little message for you…

On a cold November night in Chicago, Fedor was placed before a 264 lb Brett Rogers in a cage and was told to knock him out. Much like most of his career, Fedor faced a man who was bigger, stronger, and a way better smack-talker. Fedor’s launched a single overhand right that sent Brett Rogers’ consciousness into the metaphysical unknown, shocking the world yet again and leaving me with back spasms as a pack of wild Russians trampled everyone sitting cageside to embrace their comrade. You know it’s special when Brett Rogers is the one who gets knocked out, and photographers like me feel the long term effects.

I’m just a mere mortal, and my back still hurts, but I never knew that machines felt pain until Fedor told us that he hurt his hand at the post fight presser. That was weird. It was like finding out there was no Santa Clause. There has to be a Santa Clause, who else would bring Fedor such a nice Christmas present? It’s been just short of 2 months and all of Fedor’s robotic parts have been replaced, his circuit boards have been re-soldered and today, Fedor returned to his new gym to prepare for his overhand right’s next exhibition. This is what he had to say in his official blog (and yes this is really him):

‘It’s been a while but I am back. Back home and back in training! I hope everyone had a nice NYE and I would like to congratulate my M-1 team member and friend Gegard Mousasi with his win in Japan. I have also fought in Japan on NYE and it’s always something special. I am glad to be back in training and I am glad that I have a goal to train for. I hope I can announce very soon when, where and who I will fight next. For now I am just focusing on training and on my family, and that is what I like to do the most. I promise to keep you up-dated…’

This dude TBA has appeared on lots of fight cards before, but always seems to be replaced at the last minute with another fighter. Herschel Walker is also looking to meet TBA on Strikeforce’s January 30th card, but I’m betting he’s going to drop out and let Ray Mercer take his place. [Source] 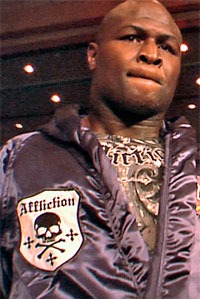 James Toney urinates on your ground game
← Read Last Post
Watch the story of a 2-15-0 fighter that lost to a midget
Read Next Post →
Click here to cancel reply.