Everything you need to know about Supremacy MMA 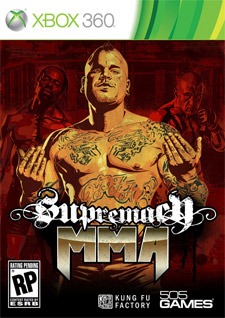 OK, I just got done with a multi-hour play session of Supremacy MMA, so it’s time to fill you guys in on everything I know. Since I couldn’t find a notebook or any paper I have a rather large collection of yellow sticky pad notes spread out across my desk that I’m going to have to make sense of. Lets jump right in.

This is not a sim in the fashion of EA MMA or even UFC Undisputed. The game plays like your standard 2.5D brawler, Tekken probably comes the closest to being a comparable fighter. The game moves fast, and depending on what fight style you choose from (MMA, kickboxing, submission wrestling, BJJ, Muay Thai, Karate, Judo or boxing) you have and assortment of moves that play to your strengths. What fighting style you choose makes a big difference not only in play style, but how a match will go. Malipet for example, is a fast striker with deadly kicks that have crumpled more than a few legs in my play time, but he truly is lost on the ground and gets subbed regularly. When I play as St. John Ackland however, I love taking people down and dropping them on their heads in route to a GnP win or sub. This game emulates the style vs style aspect of the early no holds barred matches from the early 90’s that we hold so dearly in our memories. It really is Karate vs Judo rather than a MMA match.

During my first few minutes with the controller in hand I was lost, almost overcompensating for the more complicated by design sims that I’ve been playing for years now. Things eventually started slowing down for me after a few matches. Here are how the controls are broken down: there are two strike buttons, for the sake of conversation we will use the Xbox control scheme. X and Y are your strikes or combo buttons as the manual has it. Standard fighting game combos of the X X X Y variety are here, and you can definitely survive on striking alone, but when you integrate grappling into your arsenal is when the game really starts to shine. The A button will be your all purpose grappling button, you use it to advance position when coupled with your analog movement stick (move up and a for a Thai Plum for example, or forward and a for a single leg). The B button is your grapple block button, and when you have two players who have a hang of the controls, the transitions, blocks and reverses are really fun to watch. I’ve had some genuinely cinematic and epic scrambles that have led to fantastic finishes. There is even a ‘Rush’ button that gives you an adrenaline boost to enhance your striking and durability for a few key seconds. My biggest complaint is the lack of standard D-pad controls. I really would have appreciated that as the command inputs are kind of wonky at times and I absolutely suck at these types of traditional fighting games on the analog stick. 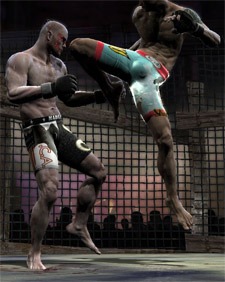 The graphics are surprisingly good, the framerate is high and the lighting effects are nice. The different arenas and backgrounds are highly detailed and diverse, from an open mat session in Brazil to an underground fight club, or a tournament setup that looks like it was modeled after Blood Sport. This game wears it’s influences on it’s sleeve (and even features MiddleEasy logos). The game very much delivers on it’s promise of being filled with blood and broken bones and this will be apparent from the moment you start your first fight. A few punches to the face and bruises will instantly start forming, blood will trickle from the nose, hematoma’s appear and and limbs snap liberally. Yes, I plugged in a second controller just to test out snapping some limbs with constant leg kicks. Yes, it was very satisfying.

The audio is loud and in your face. Each punch kick and throw sounds like it happened inches from you and the sound effects are probably some of the strongest across the available MMA games. Supremacy MMA features more double bass than a Josh Barnett training session and metal heads would be proud. I don’t know much about this type of music but I definitely started feeling the urge to break things and growl mid way through my play session. Then I turned the music off in the options because my wife said I was getting to aggro.

My favorite part about Supremacy MMA comes from the story modes. Each story begins with an animated cut scene telling you about how each of the fighters is overcoming a dark period in their life or trying to crawl their way to the top. The plots are surprisingly mature, sometimes hammy and always dark. Almost jarringly dark at times. They have a real Guy Ritchie feel to them. There are ‘Supremacy Stories’ for each of the ten male characters that bring you from the depths of fighting in prisons or bars to Thailand and eventually the Supremacy MMA arena. Between each fight you get cutscenes furthering the plot. Sometimes (in the case of Jerome Le Banner) if you lose, the plot continues to move forward and you may fight a different opponent. The Femme Fatales are featured in a story mode for the ladies, a quick two chapter affair featuring either Michelle Gutierrez or Felice Herrig. I wish there could have been more there. To round out the single player experience there is a tournament bracket (which should be in EA MMA and Undisputed), standard VS mode and training sessions.

There are nice little touches like combat sport trivia during load screens, and unlike other games there are more than five facts that keep repeating. To be honest I only saw a few repeats about the Queensbury rules before I stopped. Xbox Live worked fine but it was hard to find matches but that is to be expected as the game just released. That said, the servers were up and running unlike some other releases we have seen. 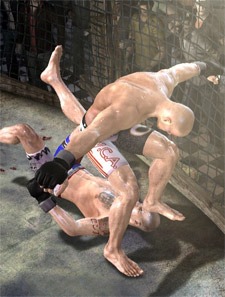 Alright, only a few sticky pads to go, on to the glaring negatives. The game only has 12 characters to choose from and there is no Create A Fighter feature. Huge disappointment. You can only fight the two ladies against each other, animations can be interrupted fairly easily with a well timed punch, which makes the timing of ‘super strikes’ really difficult and annoying to pull off. The computer is cheap, like all games of this genre it blocks perfectly and can really make progressing through the game difficult under certain fight styles. Malipet was my guy, I was throwing kicks like there was no tomorrow, but I couldn’t get used to the Judo guy and his lack of striking at a distance. This may not be a problem to some and it may even be part of the design in style vs style but as the early UFC’s taught us: some martial arts don’t balance well against others. I’ve been repeatedly taken down by wrestlers and could do nothing to stop it. Very cheap CPU. Or I suck. Probably both.

Regardless of the single player experience, every fighting game is fun with friends (almost) and Supremacy MMA is no different. Once you start going the distance (matches are only five minutes long) with a buddy you will find a satisfaction that isn’t in other MMA games. It could be the fact that it almost isn’t an MMA game, it’s more like the BloodSport game that was never made than a pure MMA game. Being covered in blood and knowing your leg is going to snap unless you land that one huge punch that will crush your opponents face and send blood flying all over the cage is very fun, even if the mechanics aren’t the most polished in the world.

In closing I can’t reiterate enough how different of an MMA game this is compared to what we are used to. As I said above, it’s really more for the crowd who didn’t like Undisputed or EA MMA and really, really like metal and skulls with wings. So if the other MMA games out there aren’t doing it for you but you still want to get your flying triangle on, give Supremacy MMA a try. It’s completely different than anything you’ve ever played in this genre and is worth a look. There is a demo (that doesn’t really do the game justice) that you can download off of Xbox Live and the PS Network right now, and the game is actually on sale now for the fair price of $50 at certain retailers. Once you get past the control scheme and really find a fighter you gel with it’s a pretty neat experience but it’s not for everyone, that’s for sure.

If you guys have any more questions, feel free to ask them in the comments and I will do my best to answer them.